Someone's life comes to an end!

Things get pretty crazy as this arc comes to an end.

This is an issue that really all builds up to the final scene. If you've been keeping up with solicits or the letters section of NAILBITER, then you know someone is going to die in this issue. However, there will be no spoilers here, but we can say the lead up to the moment is phenomenal.

There is minimal action within the issue as the story is strung along by these moments and conversations, moving along the plots that have been running since this whole story began almost two years ago. Josh Williamson's strongpoint has always been dialogue and giving characters unique voices and that still completely holds true here. Without sounding entirely cliche, these scenes are pretty riveting and a great lead-in to the final, brutal act.

The book is going on a two-month hiatus after rolling straight for 20 issues, with two small breaks. The biggest problem with this issue is that it leaves the reader at a HUGE cliffhanger, then pulls the rug away, letting them know, there's going to be some downtime before some answers. In addition to that, there is this small, underlying feeling that something bigger should have happened. Without getting too specific, there are answers to Buckaroo, floating in the ether, but the reader isn't aware of them yet. There's a lot of mystery going on, but too many questions go unanswered. As much as I love what this book is and the way it plays out, that's a bit of a bummer.

Pun completely intended, Mike Henderson and colorist Adam Guzowski completely kill it on this issue. The final four pages of this issue are beautifully disturbing. They contain some gruesome moments that will stick with you and the way there are blood splatters all over the negative space during these scenes is a genius design to intensify the brutality contained in these pages. Obviously, the rest of their work is consistent and great, but those final pages are the nail in the coffin.

It stinks that this book is going on a bit of a break, but it truly goes out on a high-note, in the most disturbing way possible. Williamson continues to grip the readers in with shock and awe with some tremendous art from Henderson and Guzowski. There are some moments here where the reader wish more would happen with the secrets of Buckaroo, but overall, this was a fantastic book and a series you need to read and catch up on, if you're missing out. 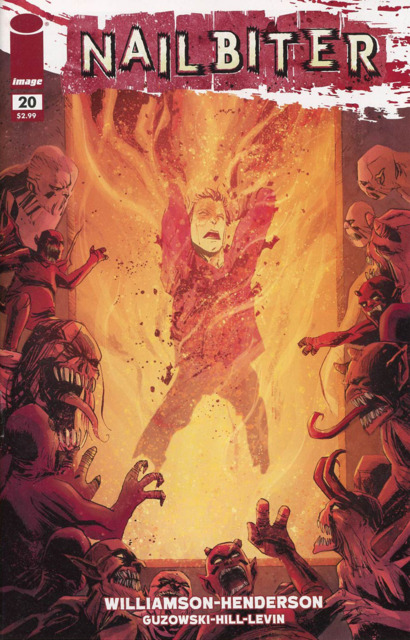