Josh Williamson and Mike Henderson are spinners of nightmares…allegedly.

The first issue of NAILBITER hooked us with a super-creepy serial killer and some equally creepy lore surrounding his hometown, and this month's follow-up keeps the suspense high as our intrepid (and sometimes bullheaded) hero ventures into sinister Buckaroo, Oregon. Colliding with an acquitted murderer and chasing a missing cop, Finch starts to learn more about the strange inhabitants of Buckaroo -- and we do, too.

Good crime books tend to have just the right amount of mystery to keep things interesting but not confusing, and NAILBITER hits it on the nose. We've got plenty of threads to follow -- What happened to Carroll? Who's the next Butcher? Is Finch going to snap and go after an innocent person? Who's the body, and who put them there? -- but all of them are interesting, and there are hints of links between them, so it's not overwhelmingly difficult to follow.

Mike Henderson is equally at home depicting casual conversations and gruesome killings -- he's definitely getting a lot of opportunities to show off range in this book, and his storytelling is on point. I'm loving the expressiveness of his faces; Warren's coy smirk is perfect during the improptu interrogation, as are Finch's grimaces as he learns more about Buckaroo and its denizens.

NAILBITER is well-paced, unraveling information at a digestible rate and keeping tensions high. It's also funny; for a title in the crime/horror genre, it does a great job of balancing the grotesque with the snarky.

Is it bad that I was hoping Warren's soup wasn't beef? I feel like that little red herring got my hopes up (in the sinister kind of way that ones hopes get up when there's something extra creepy in a story), and then Warren's "I'm not a cannibal" remark dashed them away.

Edward Charles Warren might not be serving up human flesh, but Williamson and Henderson serve up another twisted installment of NAILBITER, and it's delicious. If you've got the stomach (no pun intended) for a creepy crime story, this one's a must-pull. The pacing is excellent, and it's definitely hitting the right beats for a suspenseful tale that knows when to be serious and when to inject a little bit of humor. I'm not sure if this book is enough to get me to stop biting my nails -- yet -- but it's piqued my interest, and will probably give me some nightmares. 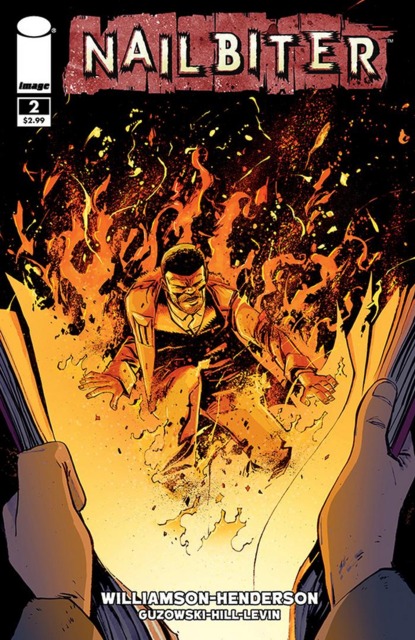