The newest kid on Marvel's block hails from Jersey, and is a 16-year old girl. She's a regular teen, with parents who don't want her to go to parties, a complicated relationship with the popular kids, and a great connection to the Marvel comic universe (the depths of which she doesn't even know yet!).

There must be something about Marvel titles with "Marvel" in the title, because this book, like CAPTAIN MARVEL, is pitch-perfect about capturing its lead and supporting characters' voices. G. Willow Wilson is spot-on with dialogue, and selects scenes that are just-right for a first issue with a new character. We have an immediate sense of who these people are and how they interact with others, and it's a great way to kick off a series. We've only seen Kamala for twenty-odd pages, but it's clear that she has strong convictions, a great sense of self, and plenty of teenage -- and possibly superheroic -- challenges ahead. And she feels real, revealing that she's a comics fan (hey, relatability!), having genuine interactions with family members and friends, and trying to fit in without being untrue to herself.

Helping capture the essence of these soon-to-be-familiar faces is Adrian Alphona, whose pencils are stylized but warm. I'm enjoying the character designs, and absolutely love Kamala's lightning jacket (hello, crafters -- please make this!). There's a dreamlike quality to many of the panels, which serves to enhance the surreal feelings Kamala must be having -- both as she escapes in her fanfic and when she encounters the power-embuing mist.

Above all else, MS. MARVEL is steering Marvel in a fresh direction, introducing us to a brand new character with dreams and challenges that we get to experience for the first time. She's named Ms. Marvel, but Kamala is all-new; her daily life isn't the same as Carol's, nor is her heroic transformation. And, of course, she's helping Marvel round out a more diverse cast of characters -- as much of the hype surrounding this title has mentioned, Kamala joins a short roster of female solo-title leads and an even shorter roster of Muslim mainstream superheroes. Not only is it great to see a wider palette of faces in the Marvel universe, it's great to meet a new character in a lead role.

I'm not sure how I feel about the new Ms. Marvel's hair/look at the end. I can't tell the reasoning behind making her look so…Carol-like when she has her own thing going already. (I suspect it's a temporary look, since her character design has appeared in so much marketing collateral, but I'm not digging the blonde.)

MS. MARVEL makes a delightful debut, showing confidence and heart even before she puts on a mask. Kamala is not your average superheroine -- she probably has a lot more in common with readers than most of the capes and suits in mainstream comics -- and her stories seem like they're headed in an exciting direction. Kudos to Marvel for expanding its range; amping up the diversity factor in a way that doesn't feel token or temporary is a great move, and MS. MARVEL is launching with a solid first issue and a world -- a universe, even -- of story possibilities. 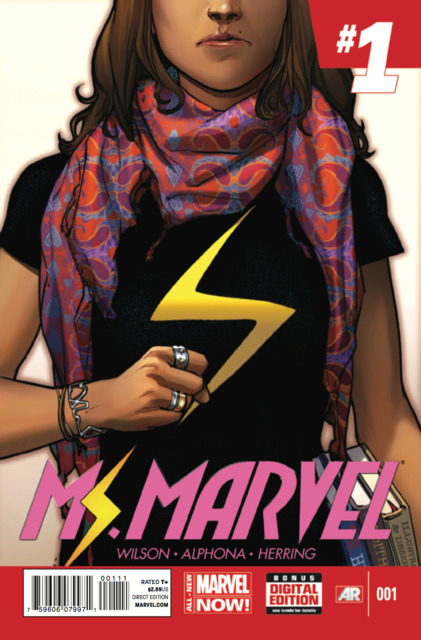