Moon Knight the movie is coming to a theater near you.

The issue follows Steven Grant, who is actually Marc Spector. Grant is an actor playing Moon Knight in a film currently in production. It also bounces to Jake Lockley, the taxi cab driver who is one of Spector's personalities. Finally, there's Marc, a member of the Moon Knights, an intergalactic strike force, engaging in battles in space.

Like the first arc of this series, the book spins a story which continuously asks the reader "Is all of this really happening?" The book bounces around, discombobulating the reader, as well as Marc Spector. While everything happening in this issue is engaging and quite the enjoyable read, it's confusing, but that's kind of the interesting thing about the way writer Jeff Lemire and artists Wilfredo Torres, Francesco Francavilla, and James Stokoe are crafting this new story.

As mentioned, there are three different artists on this book and while they all have very distinct styles, what each artists is doing here works exceptionally well for the story. Torrres' art is the backbone of the issue, for the Steven Grant story. It's clean, crisp, and Michael Garland's colors make this whole story feel grounded. Francavilla's work is a bit trippy and his color palate is unsettling, when compared to what Garland is doing. Stokoe's work is the most out there, but completely fitting for the story he's presenting. His art has this feeling of urgency and chaos to it. Strangely enough, it all works together nicely.

Where this issue loses me is that we still don't know what's really going on. While the question of "Is all this happening" is intriguing, the issue doesn't give enough to the reader to keep them coming back. This feels like a story that may have a better appeal in trade, rather than month to month, but it may be a bit soon to make that statement.

Moon Knight is a weird book, but it's a wonderfully nice break from the current Civil War II storyline happening throughout the majority of Marvel's monthly books. It's different. It tells its own story without being roped into whatever else is going on. It's has a unique voice as a comic that tells a story in ways we've never seen before at Marvel. It's not perfect, but it's one of the coolest series of 2016, right up there with Tom King's Vision. Lemire and companies take on Marc Spector isn't traditional, but don't let that scare you away from this fantastic book. 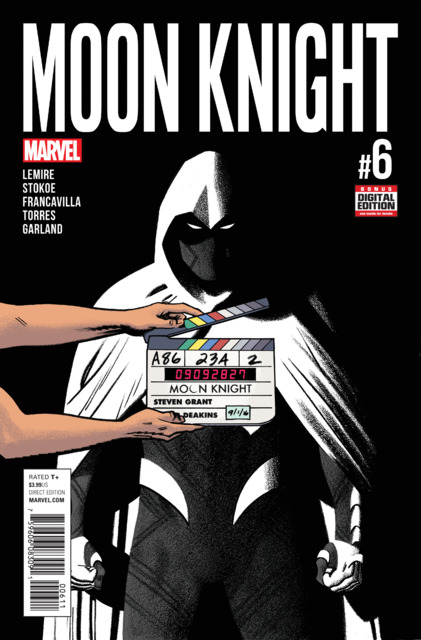