Moon Knight continues to be a man of action and takes on another bizarre case.

How much am I digging this series? I've long loved Moon Knight and felt he's always been a bit of an underdog. It's been great seeing him rise in popularity with this current series. Warren Ellis has been taking an interesting approach to the character. IN a series of self-contained stories, we're seeing Moon Knight take on a variety of different cases. It's a cool feeling not knowing exactly what to expect with each issue. Ellis may be giving us small doses of the character in this format but you can tell he has a firm grasp on who Moon Knight is. Seeing mention of past characters is absolutely wonderful. I have to admit, I didn't think I'd see a reference to Robert Markham.

Declan Shalvey gets to wow us once again as this mission gets a little trippy. The simple matter is, you most likely won't be prepared for the type of battle Moon Knight faces here. Jordie Bellaire's colors takes the story to a new level and supercharges the entire atmosphere. There are some extremely gorgeous pages to be found in this issue.

Yes, we know this creative team's days are numbered. Issue six will be the last for Ellis and Shalvey but thankfully Bellaire is staying on.

As for this issue itself, there is that sudden ending feeling we've seen in some past issues. Twenty pages sometimes just doesn't feel like enough. We know the story is going to be resolved but in some cases, like this, it almost feels like it isn't completely. What happens next? Does Moon Knight beat the wrong-doer to a pulp? Does he tie him up for the police? Do the Avengers know he's in town?

Ellis, Shalvey, and Bellaire have done it again. Each issue gives us a new and separate adventure for Moon Knight. Ellis' stories are taking the character, and us, to different and strange places. Shalvey's art along with Bellaire's colors are making this an unforgettable run. As with some of the previous issues, there is a slight feeling of a sudden ending but that's part of the charm of Ellis' storytelling in this series. It almost leaves a little to the imagination and makes you think about the possibilities in what happens next. It might be a different approach to what comic readers are used to but we're getting some trippy stories along with gorgeous art. 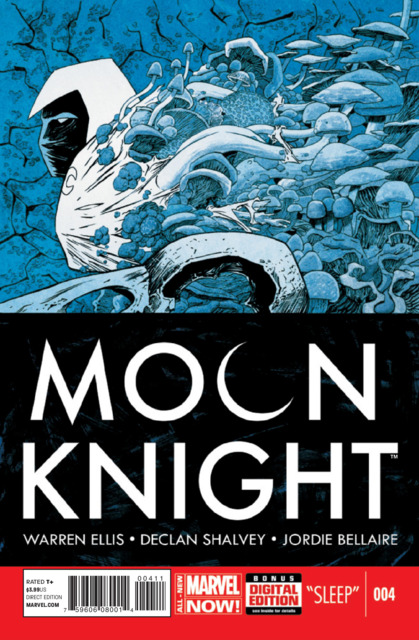