Marc Spector lost his connection to Khonshu. Now he’s falling out of a plane with no parachute. Brian Wood and Greg Smallwood are bringing things to an end.

Marc Spector hasn’t had it easy lately. After being manipulated by the mysterious “Doctor,” he found himself separated from the spirit of Khonshu. Imprisoned, Marc found a way to escape. It’s just unfortunate he’s now finding himself falling out of a plane.

Moon Knight is often depicted as a complex character. He has different aspects to his personality. We’ve seen throughout this series that those different aspects can affect the way he approaches a situation or fight. Brian Wood has put Marc Spector in a situation where he is forced to take a different approach when it comes to fighting and trying to defeat the “bad guy.” It’s a great change of pace in seeing Spector do things differently and adds to the ‘anything goes’ feel we sometimes have. We may have had single, self-contained stories in this volume and it’s great seeing some follow up and a continuation of the different threads seen throughout.

Greg Smallwood’s art with Jordie Bellaire’s colors keeps getting better and better. The scenes with the conversations with Khonshu have a nice creepy undertone. The color and shading really makes the art pop off the page in a pleasant way. There’s been a slight absence of “Moon Knight” in the last couple issues but with the way it all looks, especially here, you don’t miss it at all.

With this being the final issue of Brian Wood and Greg Smallwood’s run, there’s a tiny feeling of things building up and escalating quickly in order to reach the conclusion. It may just be a matter of time passing unnoticeably but if felt like Marc when a long way from the beginning to the end of the issue in a short period of time.

A minor note which doesn’t affect the rating, next month’s cryptic solicit mentioned “shocking events” that were to occur in this issue. There really weren’t any “shocking moments,” just a really good story with one area that could lead to complications in the future issues.

We’ve reached the end of the second arc in MOON KNIGHT. This also marks the end of Brian Wood and Greg Smallwood’s fantastic run on the series. Moon Knight has had a difficult time lately with his enemies and we get a pretty cool situation with Marc Spector tracking a different approach to things. Wood and Smallwood end their run with a solid issue. Jordie Bellaire’s colors are phenomenal as usual. Moon Knight fans can be thankful for two consecutive great runs in this series. How does Moon Knight survive this battle? What’s next? It’s going to be a long month as we wait for the new creative team to take over. 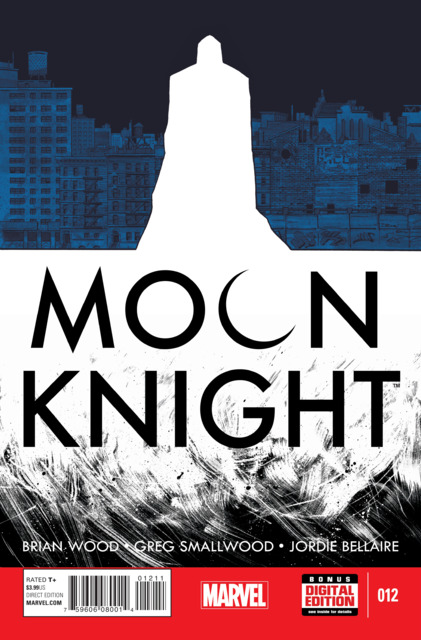