Gigantic monsters are attacking Earth. It's up Marvel's heroes to stop them.

What's this? Another Marvel event? First of all, you can relax. This isn't the usual crossover we've been seeing lately. Monsters Unleashed starts out as more of a look around the world. When giant monsters appear, the Avengers are at the scene to put a stop to them and to save civilians. What we soon discover is, this is not an isolated event. Heroes are seen at other locations around the world, fighting similar gigantic beasts.

In other words, we have heroes fighting evil forces instead of each other.

In some ways, this is a showcase of the beauty of a shared comic universe. Often, there's a nagging feeling in the back of your mind, or at least mind, wondering where the other heroes are when a catastrophe is taking place. Giant monsters attacking cities? You bet the heroes will make their way to fight them. When it's an attack spread around the world, we see a fight on many fronts.

From this first issue, we don't see a full fledge traditional crossover. The different teams and heroes are spread out. We can assume they may come together, but for now, they each have their own area to cover. I'm not sure why the X-Men were in London, but thankfully they immediately jumped into their fight.

Cullen Bunn throws us right into the action from the first page. The art is gorgeously handled by Steve McNiven and Jay Leisten with art by David Curiel. We get a great sense of the scope of the danger and Curiel's colors really enhance the scenes with how he handles the lighting and explosions.

There were some moments the dialogue felt a little off. It makes sense for someone like Hercules to be boisterous. Jane Foster may have Asgardian powers, but I don't really remember her refer to herself in the third person often. It's understandable with big action sequences, the characters need to say something. Otherwise it's just a series of panels with fighting.

Monsters Unleashed delivers a different sort of comic book event. Cullen Bunn, Steven McNiven, Jay Leisten, and David Curiel set the stage across Earth in the Marvel Universe when giant monsters begin attacking. The appearances by the different characters show the scope of the threat without cramming the heroes in each others' faces. Marvel superheroes fighting huge beasts isn't something we everyday. The rest of the monster-fighting issues should be a blast as well. This is a good setup and nice hors d'oeuvre for what's coming next. 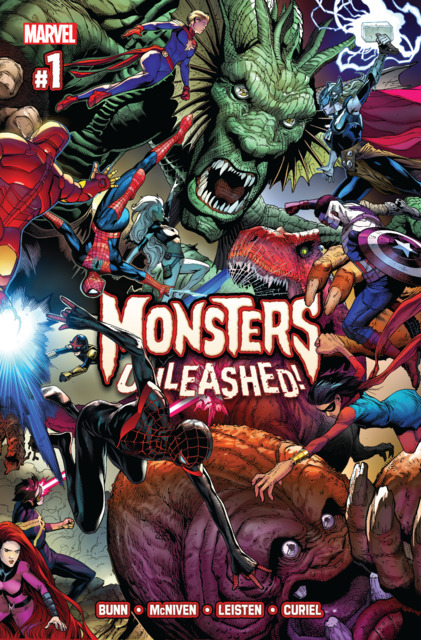