Welcome to Killville! Hope you survive the experience!...but probably you won’t.

MODOK’s had a bumpy ride of late. From serious, lethal threat to punchline to surprisingly sympathetic turncoat, he’s become Marvel’s favorite empty vessel this side of Deadpool. And that’s not necessarily a bad thing as the character is, objectively, completely absurd. He’s a giant weaponized psychic head with tiny arms and legs. He is the definition of absurd. Chris Yost seems to understand this fact and leans into it in this issue without crossing into the full-on comedy territory that Ales Kot introduced with his SECRET AVENGERS MODOK. That’s right: MODOK is back and he is LETHAL and does not CARE about the human cost. There’s a lot of internal monologuing by the man with the big head, and the way Yost writes him, it’s great. He manages to instill the character with a certain dry wit where he 100% believes that he’s the smartest person or being in a given interaction and is usually right, but is also usually insufferable about it. He’s also got a grudge against God, and on Battleworld, that means he has a grudge against someone very specific who likely won’t be a fan of said grudge coming to light. But Yost doesn’t write MODOK as some kind of humorless murder machine, that would be dull and uninspired. He writes him as absolutely insufferable, but also ruled by his own worst instincts. That K in MODOK stands for Kill, and that is exactly what he does in this issue. And he does a LOT to a LOT of different people and things. Yost gives us most of the issue from his perspective and he makes what could have been a very boring, rote issue incredibly interesting by making the motivations of its central character completely contrary to his actions. At times. Other times, it makes total sense. If that seems odd, it’s only because MODOK is smarter than all of us.

Amilcar Pinna provides the pencils while he and Terry Pallot supply the inks and this book is a wonderfully weird feast visually. There’s a great deal of just straight-up weird stuff, but it never loses focus or looks too, too off, retaining the veneer of of realism to the point that stakes matter. This isn’t a realistic issue on any level, but the moment-to-moment action feels very realized and that’s important. Rachelle Rosenberg provides the colors, and here is another place this book shines: the colors are gorgeous. Rosenberg gives the book a real sense of place without tying it down. The absurd remains absurd but things that need to be kept grounded still are, as odd as that all sounds. This is a book about a giant, jet-propelled head that kills people psychically, there’s going to be some oddness, but the team makes that oddness seem ordinary which, in turn, makes it a great deal more palatable.

MODOK is insufferable in this issue. That’s obviously by design, but that doesn’t automatically mean he becomes worth following over the course of several issues. One of the hardest things about making a villain-led book is that the villain often must be sympathetic or have some sort of motivation that makes him worth following, but MODOK is just...a jerk. He comes off like like every jerk who uses big words without actually knowing what they mean and without anything to sympathize or connect with.

Whether or not the protagonist is likeable (he isn’t) or there’s some prurient image at the end of the issue, this is still a very fun book that has a very new and interesting take on a well established character. MODOK has been a joke for a long time and it’s interesting to see him treated like a legitimate threat rather than laughed off as the impractical, hilarious being that he is. This issue shows a bit more of a serious story than may have been expected, but it’s still highly entertaining, and shows some vulnerability in its protagonist, strange and ham-fisted though it may be. 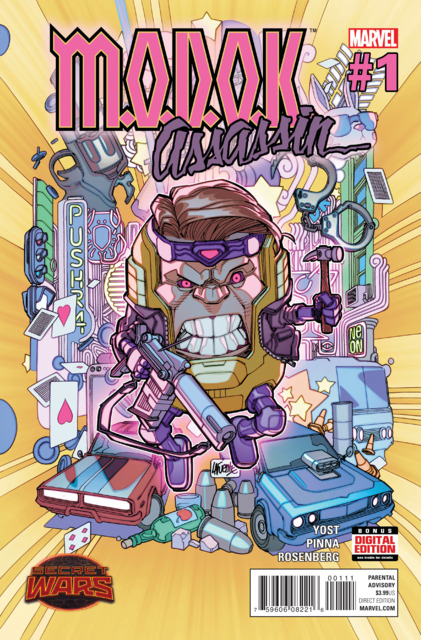