Ganke is man enough to admit when someone's tush looks good. Also, Peter Parker may or may not be back.

Miles is confronted by what seems like Peter Parker, who is apparently back from the dead. He discusses the situation with Ganke and whether or not he should tell Gwen. Meanwhile, the two Spider-Men are robbing things that belong to Tony Stark.

Storywise, it's pretty basic, but this issue does a fine job of keeping fans talking about what's actually going on in this book. There's a lot of mystery between who the two spider-men are and whether or not Peter Parker is actually alive or whether this is a clone. Writer Brian Michael Bendis leads the reader to come to their own conclusions, which is easily the best part of this issue.

The first half of this book is like a reintroduction to who Peter Parker is and what has changed about him. He's less understanding a bit angry, which leads Miles to believe that he's a clone. Peter has a problem with Miles picking up the mantle. That's very interesting that Bendis explored this area and had the two characters talk about this. It's not something you'd see normally in comics: two characters really getting into every that's happened in this world over a large chunk of this book.

Obviously, as always, the art of David Marquez and the colors of Justin Ponsor is nothing short of extraordinary. These two nail it out of the park, once again, but one thing that's new and noticeable is the backgrounds during the Peter and Miles scenes. Certain panels have a clouded scene behind the characters, which is a great addition to the scene, instead of leaving the background blank.

Not a lot happens here. You can sum up the whole issue in a couple sentences. While everything in this issue is very enjoyable, very little actually happens in issue.

MILES MORALES: THE ULTIMATE SPIDER-MAN #2 is a very solid issue that does a good job at building up the new series and potential story lines; however, it does so at an extremely slow pace. It's still a good issue and leaves readers not only wanting more but questioning the world Bendis has built up. The problem is that overall, the reader will feel like there wasn't much going on here. Regardless, it's still a great read and building to something awesome. Overall, I highly recommend it. 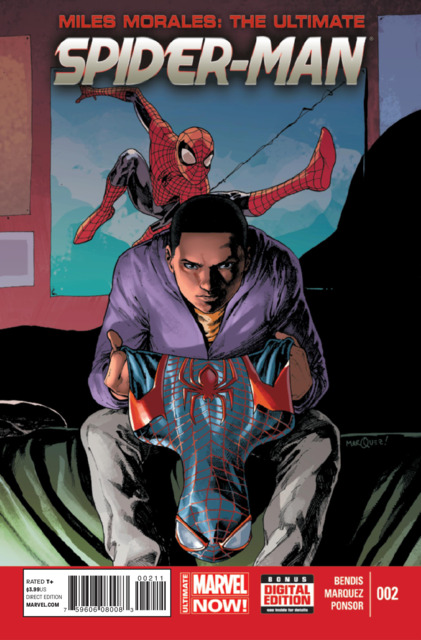