It's the final showdown between Miles and Norman Osborn!

Miles and Peter team-up to take out Norman Osborn for the last time. What is presented is an incredibly epic finale to the Norman Osborn story that doesn't answer everything but gives a bit of closure.

Apparently, it's really hard to keep Norman Osborn down. We've seen whole issues devoted to a Miles/Norman battle in this very volume, but what writer Brian Michael Bendis does well here is interweaves some great dialogue between Norman and Miles about who Miles' father truly is. Although these scenes just come off as Norman trying to manipulate the situation, the ending of the issue gives the reader a reason to believe that there's some sanity and truth to Norman and everything he says.

Let's jump right to the ending here, and not the Kate Bishop one. There's a pretty big reveal here, and one that may shed some light on what happened with Peter Parker as well. We're not going to spoil it, but it changes a lot what's going on and it's incredibly surprising. There's also a cool Kate Bishop reveal that's just two words, but opens up a whole realm of possibilities to where this book can go.

This volume, in hindsight, as felt like a bit of a mess and getting pulled way too many directions. It finally feels like it has found its footing and I'm actually really excited to see where it goes next.

Aside from one problematic moment, the art from David Marquez and colors from Justin Ponsor are a hit, as always. The action sequences are exciting and show a great deal of movement. Ponsor does some wonderful work in the scenes where the background is lit up with fire and the characters are shrouded is a bit of silhouette. These are gorgeous looking scenes and help establish the immensity of this battle.

Halfway through the book is a few panels of the most confusing storytelling I've seen in years. It's a two page spread featuring numerous panels. In said panels, Miles and Peter are fighting Norman and for two pages, it looks like his head was cut off and sitting in the grass. Maybe his head is looking straight up and staring at the "camera," but nothing artistically suggests that at all. In the next panel, his head is attached and fine. I stopped and stared at those panels longer than it took to read everything else in the issue.

What this issue offers readers is brutality but not just for brutality's sake. Norman Osborn is a villain that must be stopped and watching the events unfold was incredibly exciting. The book's direction is a bit more apparent here and those who have felt the series become frustrating will find themselves a bit more relieved. This book has a top notch creative team behind it featuring one of Marvel's best new characters, so the future is bright for Miles Morales. I highly recommend this issue. 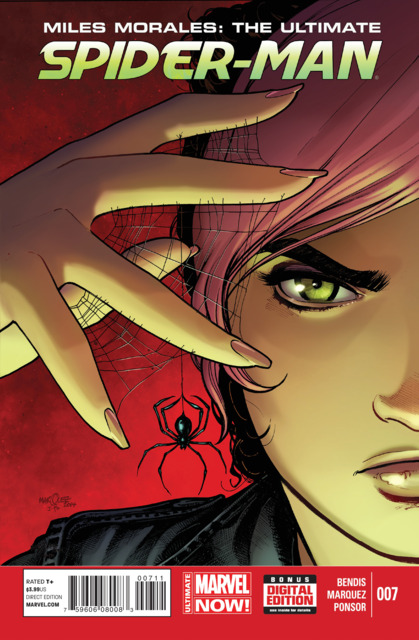