Miles faces Norman Osborn! Luckily, he has a little help from Peter Parker.

The moment a lot of fans have been waiting for, since the start of the series, is here. Miles Morales and Norman Osborn have a no holds barred, drag-out fight. Peter Parker Spider-Man returns to help even the score as well.

If you wanted a fight of pretty epic proportions, then this is the issue for you. This fight is pretty dang brutal and doesn't let up, even though it destroys the neighborhood around Miles. David Marquez (art) and Justin Ponsor (colors) really deliver a lot of suspense and drama through their art in this issue. There's some particularly great looking moments, like web Miles hits Osborn in the face, with the helicopter shining a light down on them. The color work here is awesome, especially on Osborn's face.

Marquez makes his page layouts as chaotic as the battle itself in this issue. Each page is unique and gives the readers a new perspective on what is happening in this fight. Each page offers something new from this fight and this is a book Marquez was born to draw. He takes a lot of chances with the way he presents Bendis' writing and it has yet to disappoint.

In addition to this fight, we get to see the reactions to those closest to Peter and Miles: Ganke, Gwen Stacy, Aunt May, etc. This fight isn't just a one-on-one (two) happening. Everything happening here has a ripple effect through the Ultimate Universe, and it's nice to see looks on other people's faces that are glued to their televisions/computers/tablets, during this.

MILES MORALES is starting to feel very formulaic. The past couple of issues have been a moment in time more, contributing to the story, rather than something a little more fleshed out. Miles has a problem, he faces said problem, it looks like he's going to fail, someone comes in to help out, and cliffhanger. While it's a fun ride, there's still little given to the reader about what is going on with Peter Parker and the Spider-Crooks, which is fine in a sense, but still a tad frustrating.

MILES MORALES #4 gives fans a fight, but puts a hold on a few of the sub-plots/mysteries that made the kick off to this series amazing. The issue is a ton of fun and has some gorgeous artwork, and it's still one of Marvel's top books, month after month. If you haven't been reading this series, what are you waiting for? Mile Morales is the greatest Spider-Man ever. I said it. 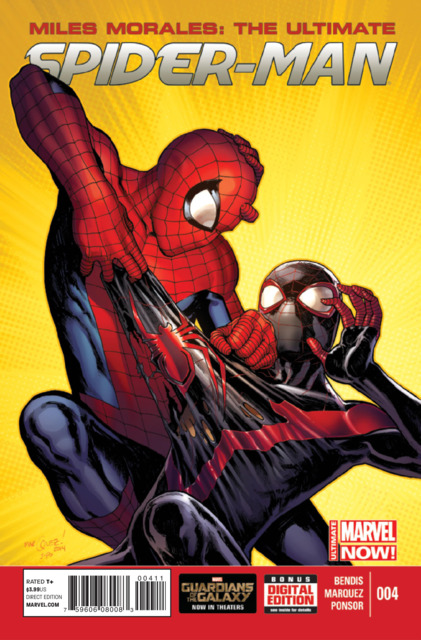