This issue gives Miles Morales some downtime, which he desperately needs, since his life has been quite the mess. Sure, the last two issues revolved around his father telling Miles that he was involved with Nick Fury in the past, but even that can weigh heavy on the heart.

What we get is the fun-loving Miles that we all know and love as he lets Sabretooth and Electro beat each other up instead of taking them both on. There's quite a few fun moments here as Miles just leans up against a pole to watch the two beat each other up. The one-liners and witty dialogue are there.

One of the most aggravating parts of this series was how the Spider-Men thieves story line just disappeared months ago. The issue opens up with Maria Hill busting in on what she thinks is the hideout for these robbers. They're not there. It's a solid opening and lets the reader know that this story is still alive and kicking, although it lost its way quite a while ago. Regardless, fans will be excited to see this all played out.

There's a few moments in this issue I want to point out as being pretty awesome. Ganke was singing a Joan Jett song. I respect that. Cloak and Dagger returned, which is great because I love their dynamic working with Miles in this book. Also, the ending of this issue was pretty fantastic as Miles is put in quite the situation after trying to go visit his girlfriend Katie, who he hasn't seen since he told her he was Spider-Man. I loved the ending of this book at it and everything makes sense, with the two issues leading up to this as well. Things start to become a bit more connected in this story. Readers will be hooked in for the next issue.

Month after month, artist David Marquez and colorist Justin Ponsor give us some phenomenal art on this series. Marquez gets a lot of emotion out of a guy in a mask through body language here, especially when he's talking to Dagger on the roof. The second to last page of the issue, with a glass of water shattering on the ground, was also fantastic and paced exceptionally well. These two artists deliver top notch work, month after month.

This book has been everywhere the past 5 issues and it finally feels back on track, two issues before it's ending. Cue aggravation.

The solicit says Miles gets a new Spider-power. Unless it's “Spider-fainting,” that never happens.

This is the best issue of MILES MORALES we've had in quite some time. For the first time in months, it didn't feel messy. We get back to the Spider-Robbers story, finally, and for the first time in a long while, Miles gets a bit of down time to get his affairs in order. This all leads up to a fantastic final page, which will reel readers in for the final two issues of the series. 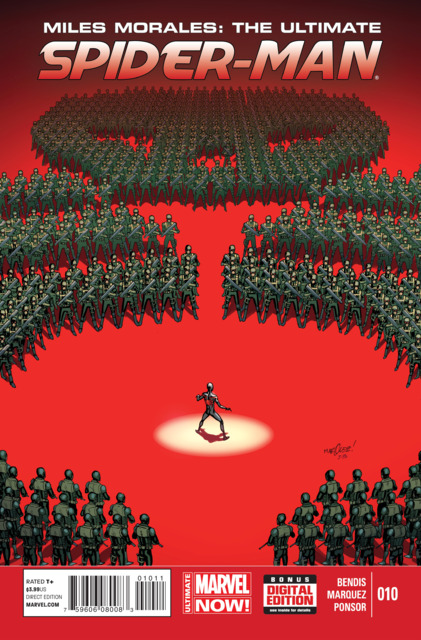