Tommy, the Green Ranger, was once a pawn in Rita Repulsa's plan. Now, he's a Power Ranger.

The new BOOM! series explores Tommy's first year as the Green Ranger, the newest member of the Power Rangers. Can he be trusted or is he still a part of Rita Repulsa's plans?

There's a lot of high expectations for this series, as the Power Rangers are a beloved series that many people grew up with. Of course, nothing will be able to live up to the false memories fans have created combined with the feeling of nostalgia for the series. However, MIGHTY MORPHIN POWER RANGERS does something surprisingly different, giving it a giant edge against the other comics based on popular properties. This series opens up by combining what fans know and love about this world with a whole new story and slant.

The series follows Tommy, the Green Ranger, after he fought the Rangers, while working for Rita Repulsa. This is his first year being one of the good guys, and this story works exceptionally well, as most of the story follows Tommy. What "ups the ante" here is that he's still having this internal battle with Rita in his mind. While the #0 issue didn't get me incredibly pumped about this series, this first issue did. There's a lot of love for the property here, and it's clear writer Kyle Higgins knows what he's doing.

The opening pages of the issue open with Bulk and Skull discussing what's happened in Angel Grove over the recent months. They're doing an online videocast, and the scenes work, but it's a lot of catchup for the readers. It does give the folks newer to the franchise a great, quick update about the team, but fans may feel like this is a little too much recapping for the opening of the series.

Hendry Prasetya did the art on the book with Matt Herms on colors, and there are times where the art looks great and times where it stumbles a little bit. Instead of outlining the characters in black, Herms (or Prasetya, we're not entirely sure who did this) plays with both black and white outlines, depending on the light source. Sometimes, it gives this book a really unique and dynamic look and other times, it looks bizarre, especially when it's it's bordering lighter browns.

The backup is pretty fun. It's a two page Bulk & Skull story from Steve Orlando and Corin Howell. Personally, I really enjoyed Howell's art on BATMITE, so seeing her get to take on these iconic characters was pretty cool. The story is short and sweet and just gives Orlando a chance to write something fun and silly.

There's always a little worrying when a beloved property gets picked up to become a comic book series; however, Power Rangers is off to a tremendous start. Aside from providing an interesting and very cool story, the issue is fun, and I want more now. This is obviously a labor of love for Kyle Higgins, and it shows. The only problem comes from the artist side of things, where the outlining style gets a little weird at times, but aside from that, I highly recommend checking this series out. A quick note: Kimberly never says "Oh no, Puttys!" It's a bummer but forgivable, since this issue was awesome.

PR is making a good comeback with this comic, the latest television series, and upcoming movie.

I haven't paid much attention to Power Rangers in a long time. I've been aware of it, but haven't really done more than glance over it. Gotta admit, though. That cover dropped a nostalgia bomb on me when I saw it. I might give it a shot if I see it in stores.

I liked MMPR when it was on in the 1990's but the first three season have been done so much it gets really tiring especially when they take out that 1990's California-style culture (maybe they do this because kids these days would find it outdated?). However, Power Rangers Dino Charge is a great series and possibly the best one post-Zordon. But the best versions will always be the original Super Sentai which pre-dates the American by 20+ years and going on it's 40th installment.

can we get a Kamen Rider book?

@spitfirepanda: If you grew up with the first seasons, then I recommend it. Really enjoying it so far.

Really want to pick up this book!

My wife and I saw the first movie and TV series on Netflix a few years back and tried watching it...man it was brutal...couldn't make it through any of it.

Loved it when I was a kid, but it didn't hold up well as I matured.

I kind of hope the new properties do well though and have that cross-generational appeal.

Man, hearing Tommy is the focus makes me significantly less excited. I don't dislike him, it's just that of the Mighty Morphing era Jason and Adam were my favorites.

Nope, it's an ongoing. Boom have already announced a mini-series set during the TV show's third season, called Mighty Morphin Power Rangers: Pink, which follows Kimberly after she leaves the team, though.

can we get a Kamen Rider book?

Not in America, but there is manga. Masked Rider got a single issue from Marvel when that show was airing, but Kamen Rider Dragon Knight totally bombed. As long as another adaptation isn't happening, don't expect a comic book.

Nope, it's an ongoing. Boom have already announced a mini-series set during the TV show's third season, called Mighty Morphin Power Rangers: Pink, which follows Kimberly after she leaves the team, though.

I'll be honest, even as a kid i wondered what the original rangers were up to after they got replaced by the new kids. So this sounds awesome!

Nice, these kids look like they've got some attitude. Except for the Red Ranger. He looks too agreeable.

Nice, these kids look like they've got some attitude. Except for the Red Ranger. He looks too agreeable.

Thanks for the smile

@JamesSpiring: Woah, I had no idea about this. I will track this down.

I've enjoyed the first 2 issues so far, brings me back memories from back in the day.

I'm trying to track this down, with no success thus far. 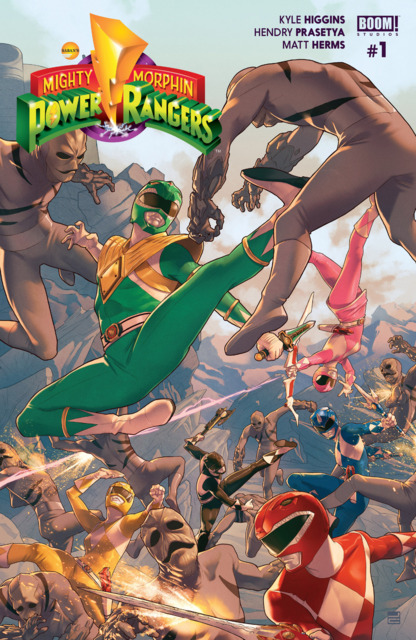