This is a comic that takes a look at the lives of some characters and everything around them.

Ales Kot has shown us different levels to his writing. We sometimes see writers stick to or focus on certain genres. Kot's different projects often give a variety. With MATERIAL, it's a little difficult to narrow it down to a specific genre. With the title, you can get an idea it's discussing the things around people. Like it or not, the world and our lives are filled with material things.

In this first issue, we come across four different people. This is a story that isn't full of superheroes or secret spies. To be perfectly honest, when you first start reading, you won't exactly be sure what it's all about. That's part of the joy of this book. Too often we immediately see where a story fits in and can start to figure out what direction everything is headed. There doesn't seem to be any connection between the four different characters. Kot does touch on some real and heavy topics. In other words, this isn't going to be easy reading while you eat a quick lunch. Kot touches on subjects such as torture, police brutality, and even questions about why are we 'here'?

Will Tempest's art fits the story perfectly. Here, he draws regular people. No insanely muscled people walking around. A majority of the pages also consist of nine-panel layouts. There is some variation but it does feel like you're getting more to the story. You should even take note of Clayton Cowles' lettering. Different parts within the comic and even within panels call for different types of font.

This is a comic you almost have to be in the right mindset to read. It's not necessarily a "heavy" read but it does touch on some deep topics. Those not knowing what to expect might scratch their heads as to what's going on in this series.

The sudden shifts between the unrelated characters might also throw some people off but it does add to the slightly mysterious nature of the book.

MATERIAL isn't your typical comic book. We often see different books designated to different genres. Ales Kot isn't interested in making this a book about a specific genre. The book takes an ambitious approach by touching on several different and pretty heavy topics. The characters feel real and you get a sense that Kot is really laying it all out as he sees it. Will Tempest's art adds to the feeling by not trying to depict the perfect or ideal versions of the characters as we often see in most comics. You might find yourself wondering what this entire series is about or how the different characters might connect, if ever, but you'll also find yourself taking an interesting journey that only Ales Kot can take you on. 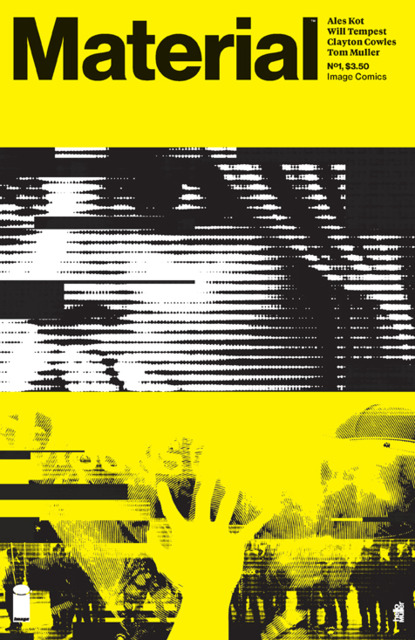