Kal-El returns to the big screen in an amazingly entertaining fashion.

Ladies and gentlemen, there's a new "best comic book movie" in town and it goes by the name of Man of Steel. Sporting great performances and breathtaking action sequences, Clark Kent's return thankfully lives up to the mountain of hype and anticipation we've endured for at least several months. This new take on the iconic character delivers a constantly epic atmosphere which mixes a more serious tone with a lot of over the top fun. And when I say "a lot," I mean it.

Yes, this is a reboot of Superman's origin -- a story we've seen countless times before -- but it doesn't suffer from a sense of overfamiliarity at all. They clearly draw elements from various comic stories from time to time ('Earth One' obviously inspired General Zod's broadcast and the symbol standing for hope comes from 'Birthright'), but for the most part, this is a mostly fresh take on the legendary character. After the grand sci-fi opening on Krypton (Russell Crowe's Jor-El is a boss), we fast forward to grown up Clark. From there, we're treated to emotionally compelling flashbacks about him learning to cope with his powers and receiving moral guidance from the Kents. There's some changes here and there to the mythos and I imagine some fans won't dig it, but for the most part, I think it's something many of us won't mind -- especially when countered by all of the things this film does so well.

Remember how The Avengers hit us with an astonishing and goosebump inducing battle in New York? I honestly believed a comic book movie (in the near future, that is) wouldn't be able to bring that level of greatness again, but Man of Steel totally does and then some. The action pieces are absolutely staggering and downright surreal. Director Zack Snyder fully unleashes the power behind these characters and when they throwdown it's visceral, intense and had my jaw dropped basically the entire time. While the two huge action scenes may be a bit too long for some, it was nothing but pure bliss for me -- I seriously can't get over how good they were and I was in awe.

My only minor gripe with these scenes was the lack of concern over the populated areas, but at least they tried to justify it each time (for example, one time Clark is beyond pissed and another time he tells them to leave). After all, Clark is new to this and he's not exactly dictating the fights all the time. It's something I can overlook, but when Clark tackles his enemy through a convenience store and blows up a gas station before the area is evacuated, I'm sure some of you will tilt your heads. And speaking of stores, holy product placement, Batman! If that kind of thing bugs you, then there's sure to be a few moments that'll make you groan.

What really sells every scene (you know, aside from super powered punches) are the superb performances and Hans Zimmer's excellent score. The music simply brings everything to the next level, making even seemingly basic moments come off as extraordinary and legendary. You'll definitely want to see this one in a theater with quality speakers.

Michael Shannon kills it as General Zod, delivering a commanding performance and truly selling the raw emotion behind his standout acts. As for Henry Cavill... well, the man just oozes "Superman." Some may complain he's a man of few words in this film, but the quieter moments with the character allow him to physically convey the tone and he does so extremely well. And, when he does chat, you can really sense the warmth, honesty and good will behind his version of Clark -- and seeing as he's a character meant to inspire us, that's critical. Also, I thought he and Amy Adams had fantastic chemistry and she definitely brings a brave and believable Lois Lane to the table. Aside from one Daily Planet employee having a silly line or two, the remainder of the cast does a more than able job as well.

It's clear Warner Bros. had a "go big or go home" mentality when kicking off the new direction for their DC universe and they delivered big time. I spotted at least two Easter Eggs which filled my face with such a goofy smile and I haven't been this excited about a movie universe's future since Tony Stark met Nick Fury. Speaking of which, there unfortunately wasn't a mid or post credits scene during my screening.

I do have some small problems with the film, but honestly, they're massively overshadowed by the things I loved. This isn't just my favorite comic book movie at the moment -- it's one of the best moviegoing experiences I've had in quite some time. With gripping performances and overflowing with absurdly impressive action, it's safe to say many of you out there will love Man of Steel every bit as much as I did. I know I'm definitely going to see it at least two more times. 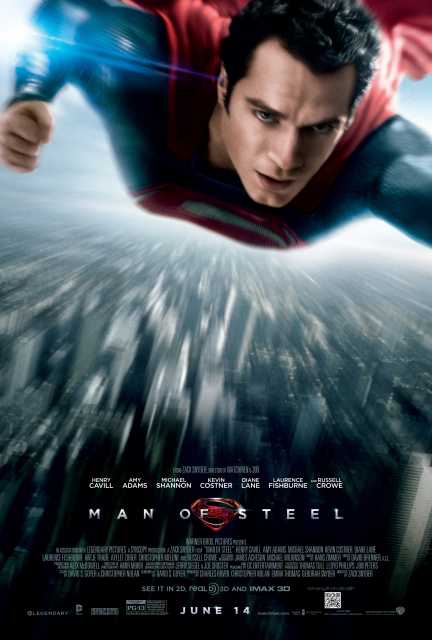