And so, with the world and all of reality crashing down around him, Magneto makes one final power play.

From where Magneto was left, contemplating his life and his legacy on the shores of Genosha after making one of the most horrific decisions of his rule, he is immediately thrust into the consequences of the final Incursion event. While ruminating with his daughter Polaris, he also flashes back to critical points in his life relating to his tumultuous relationship with the Atlantean King (and mutant) Namor. The flashbacks delve deeper not just into the relationship the two men had, but how Magneto has changed across the years, often as a result of whomever was writing him at the time, and it’s here that the greatest insight is gained: Magneto is one of the most fascinating characters in comics. Beginning existence as a one-dimensional villain for the X-Men to hurl themselves against, Chris Claremont redesigned him as a villain in name only. A lifetime of persecution at the hands of the Nazi party, as well as humanity in general, had left little room in his heart for sympathy or even nuance as he fell into the same trap as those who wronged him: demonizing everyone who wasn’t like himself. Cullen Bunn writes this as a grandiose finale, bringing a giant sense of scale to both the external and internal events of the issue, and leaving the master of magnetism with only one ultimate act to finally accomplish.

Paul Davidson steps in on visuals and, for the most part, does a fantastic job. When he’s on point, the characters have an amazing amount of detail and the action is bombastic and explosive without becoming too confusing or hard to follow. The characters look great across all their incarnations, and the ways that they change, both great and small, are well represented and look generally fantastic. The colors by Paul Mounts are dark and grim, and a little bit hazy in the flashbacks, but not without their sense of light and hope as well as bringing a sense of realism to the often weird visuals.

As a tie-in to Secret Wars, this book’s core conflict is ultimately undone. It stands alone as a good story, particularly in how it characterizes Magneto, but even without reading the core title, there can’t possibly be any way for him to succeed, rendering the core of the issue's conflict and driving force mostly moot. There’s also a jarring sense as the issue begins, throwing the reader into completely unfamiliar territory considering where Magneto was left off last issue. Overall, being a part of the massive crossover does this issue no favors, rendering it toothless and asking far more questions than it answers.

As mentioned before, when the visuals are on-point, they are wonderful, but they falter more than a few times, and it’s massively to their detriment with characters looking unusual or unlike themselves, creating moments of unintentional comedy.

This issue could have been a classic had it stuck to what this series has done best: framing critical, important action around the kind of person Magneto either is or wishes to be. As it stands, it’s still a fantastic read for fans of the Master of Magnetism, and seeing him interact with his often neglected child is great, but needing to adhere to a certain set of rules and limitations imposed by an outside story ultimately hurts it. 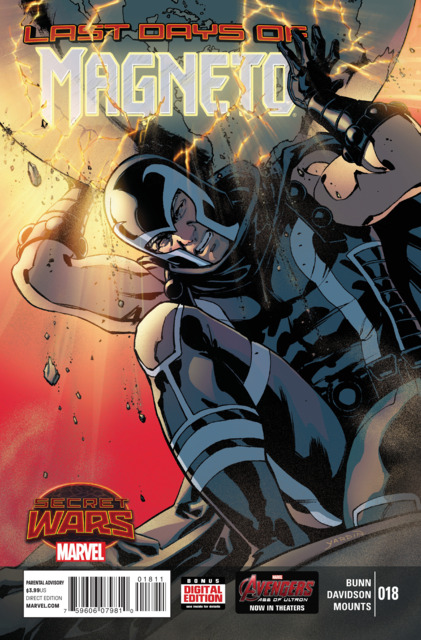