The Master of Magnetism is at the mercy of one his most nightmarish rivals. And mercy isn’t something the Red Skull is known for.

There are myriad and many ways to explore a central characters backstory, some much more effective than others. What Cullen Bunn has done here is incredibly successful on multiple levels, and shows exactly why he’s become the go-to guy for writing compelling, interesting villains. Red Skull conjures a spectre for Magneto’s past and, rather than simply engage in expository taunting and general sneering, he chases Magneto into any memory he attempts to take refuge in. So not only do we get to see glimpses of Mags’ past, we get to see them both from his perspective AND see them get corrupted by Skull’s horrible input. What this accomplishes is establish not just the character’s past, but how he viewed both these events and how they’ve affected him in the present. There’s a reason that Magneto has transitioned so seamlessly from villain to hero and now something in between. Chris Claremont may not be my favorite writer, but I would be an absolute fool to deny his legacy on characters, and none are more significant than making Magneto a Holocaust survivor to justify both the hatred and methods he uses in his crusade. Whether these events are “accurate” and therefore constitute a retcon is immaterial. What’s important is that they’re showing us how Magneto has interpreted, and internalized, the events and how they inform his character.

Series regular artist Javier Fernandez is joined by Gabriel Hernandez Walta and they work surprisingly well together, despite very, very different styles. The former covers everything that happens in the “real” world, while the latter tackles everything going on in the mental world that Magneto builds. The first has his usual super-detailed, minimalist gritty style, making Red Skull’s rictus grin a thing to truly be feared, and communicating with both injuries and body languages just how beaten down the Master of Magnetism is both externally and mentally. Colorist Dan Brown lends a dirty, grimy feel to the proceedings that fit perfectly with the tone of both hopelessness and rage. Walta’s art is almost the opposite: bright, shiny and smooth with vibrant, glowing colors (supplied by Jordie Bellaire) that starkly contrasts the extreme darkness of the subject matter. But since it’s all taking place in an unreal realm, it all not only fits, but is a great shorthand for issue’s end when things “revert.”

Initially I was a little skeptical when I realized this would be an issue exploring Magneto’s backstory and motivation. I’m more than familiar with it and didn’t need reminding, but then Bunn pulls a fast one and makes it all his own. I honestly can’t find anything that I didn’t like about this issue.

More than a refresher on the central character’s past and motivations, more of a check-in and a “state of the magnet,” if you will (you won’t, will you?) that establishes his character while adding a ton to it. Magneto’s methods may still be too extreme for most to find palatable, but it’s impossible to hate the man, and this adds more layers to the sympathy by both reminding us where he’s been and, more importantly, where he’s going. 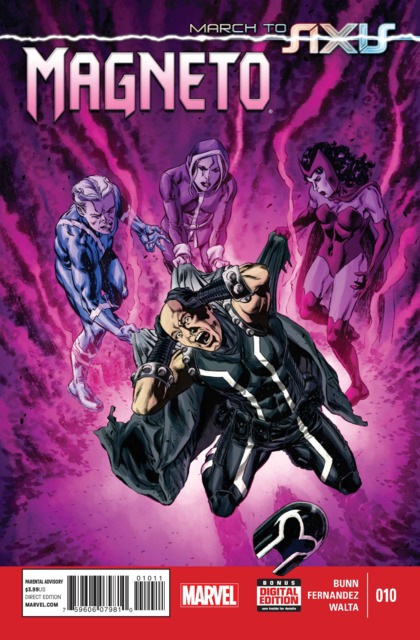