Low #1 - Chapter One: The Delirium of Hope

Rick Remender and Greg Tocchini introduce us to a brand new world, located deep in the seas.

Let's begin with the premise of this series. The story takes place in the future where the sun has expanded and made the surface world of Earth uninhabitable. Civilization has taken to building cities deep beneath the oceans while probes are sent out in search of a suitable planet to relocate. That has me sold right there.

Rick Remender introduces us to this world by taking a close and intimate look at a couple of citizens. We get to see what their lives are and the different responsibilities they have. Everything seems pretty calm but the action soon kicks in and you'll find yourself on the edge of your seat, concerned for the safety of characters you're just seeing for the first time. Remender makes you start caring about these new characters even though we know so little about them.

What's really interesting about all this is while you can see what's listed in the solicit as happening, it's not quite what takes place in this issue. It kind of catches you off guard in a good way.

Greg Tocchini's art is pretty sweet. The design of the world and colors gives this a nice distinct feel. LOW doesn't quite look like your typical comic and that's just one more reason to check it out.

If all that wasn't enough, this first issue is also slightly oversized (thirty pages) at $3.99.

There's a lot to take in here, even with thirty pages. We're introduced to a new world and characters but before we get a chance to know all the players, new ones are brought in to bring about more chaos. It's almost a little too fast paced. We're getting to know some characters and then the action kicks in big time.

The solicit reflecting a different angle of this story was misleading in a way but then again, it's refreshing to be able to read a comic and not know what's coming up.

Rick Remender has done it again. As if the latest issue of BLACK SCIENCE this week wasn't enough, Remender now has another new series at Image, on released on the same day. Remender takes on the sci-fi genre once again and shows us a world where the surface is uninhabitable. We're introduced to new characters and dangers that will definitely keep you on the edge of your seat. Greg Tocchini's art is glorious and as you read the issue, you'll find yourself eagerly looking forward to more. 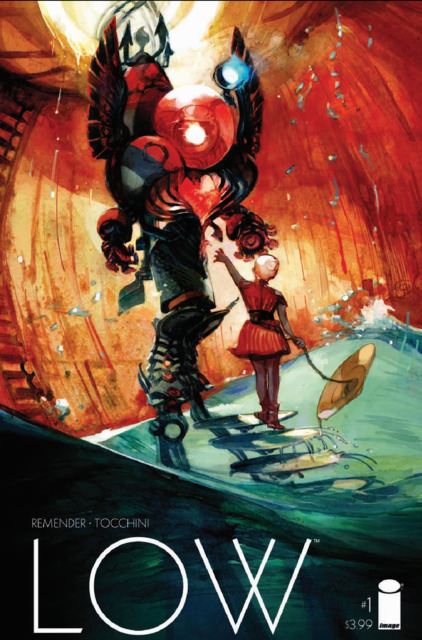