Mignola and Arcudi team up for this one shot that will leave you guessing at every turn.

One of the comics I was most looking forward to reading this week was LOBSTER JOHNSON: SATAN SMELLS A RAT. The story which is written by both Mike Mignola and John Arcudi is a self-contained one, so you really shouldn't need any prior knowledge of Lobster or prior reading of any HELLBOY or B.P.R.D. titles in order to really understand and enjoy this issue. After reading through this comic I can happily say that it is indeed not only self-contained, but it also serves as a great introduction to Lobster Johnson's character as well as the Hellboy universe. Although it is a self-contained story, this issue is also #13 in the series, so if you have been collecting and reading Lobster Johnson stories you will probably want to pick up this issue.

The story opens to a rather creepy scene where a man appears to be playing with his toys before being interrupted by an even creepier man holding up a syringe, ready to give his boss a dose of that injection. It's a very bizarre scene and one that definitely piques the interest of readers very early on, leaving them with a lot of unanswered questions. One of the first and most noticeable things about the first few pages of this issue is the way that it is illustrated. Unlike most HELLBOY and B.P.R.D. books that are minimalist, artist Kevin Nowlan's illustrations are very detailed and also very pretty. Nowlan takes the time to draw not only the miniature scene, but also the backgrounds in all of his panels in this issue. He does a wonderful job setting the tone and creating an interesting environment for these characters and for readers: the result is a beautiful book that is just in general very well done. There are no cut corners in this comic, each one is lovely and it is very clear that Nowlan has taken the time to illustrate each and every detail. You don't often see this kind of art and line work in comics today. The art alone is worth five stars.

As for the story, it's brilliant. Set in the 20's, the story is shrouded in mystery very early on and will likely leave readers guessing at every turn. The issue is written in a way that leaves readers up in the air about what is really happening until the very end, and it is that structure that makes things really interesting. Why is Lobster shooting this man? At first, he seems innocent, until readers get to the end. Normally the writer tells the story from the perspective of the hero, but the fact that you see the story through the eyes of the villain is what makes this story fascinating: at first you might just see the villain as an innocent man, or a bystander in a bad situation caught in the wrong place at the wrong time. As the story unfolds and begins to make more sense it becomes clearer that the issue

Nothing bad here: beautiful art and fantastic story-telling makes this issue one of the best Dark Horse comics I have read in quite a while.

There is nothing about this issue that I did not enjoy. Mignola and Arcudi bring readers into the issue towards the end of Lobster Johnson's investigation, and as a result we are left in the dark about a lot of things for nearly the entirety of the comic -- but it works. This method of story-telling makes the story and plot feel unpredictable: for a good portion of the comic it is difficult to determine who the villain of the story really is. Choosing to tell the story from the perspective of someone other than Lobster Johnson gives us the sense that Lobster is chasing an innocent man: the result is something very different than what we are used to seeing.

The art in this issue is amazing. Not only does it capture the tone of the story, but it really pulls readers right in in thanks to this wonderfully detailed setting. This is a fantastic issue and if you have never before read a Lobster Johnson story, this is an awesome place to become acquainted with this character. 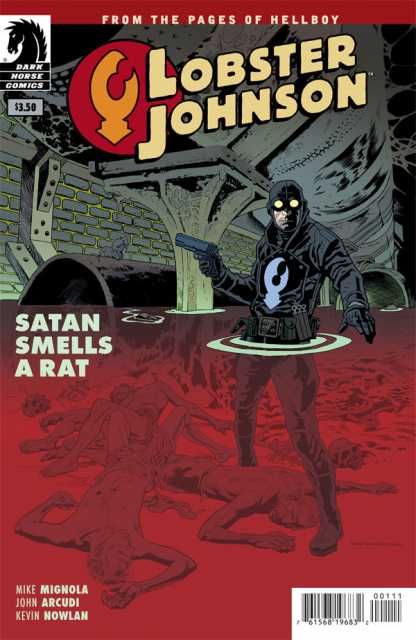