Animal abusers are worse than dirt. Damon's here, and ready to do some housecleaning.

In a medium saturated with the super and supernatural, it's refreshing to see a comic that brushes the line between fiction and reality. LIBERATOR's hero, Damon, isn't a real dude, but his story could happen in our world, no superpowers necessary. He's also fighting a very real kind of evil -- animal cruelty.

LIBERATOR deals with an aspect of our society that a lot of people don't know about, many people are passively opposed to, and a small set of people are passionately active against. Damon gets his hands dirty and breaks the law in the service of innocent animals; he's a true vigilante, and he does some things that a lot of people wouldn't be comfortable with, effectively smudging the distinction between activist and terrorist. It's intentionally thought-provoking: what's worse, breaking the law, or allowing animals be abused?

Matt Miner knows his subject matter, and he's giving us an education, cleverly woven into an action-packed story. Everything feels so real, and the story seems bursting-at-the-seams to tell more about animal activism. The book falls at the intersection between "well-researched," "actually-lived," and "things-we-want-to-do-but-maybe-are-afraid-of-being-arrested-for."

Javier Aranda tackles what I imagine is an artistically and emotionally difficult task -- drawing animals in horrific situations -- with the same force he does the rest of the book. I'm sure we'll be seeing even more disturbing images in future issues, and while those scenes (naturally) stand out the most, Arana also delivers some solid character designs and expressive faces. I like that we aren't seeing spandex-clad heroes; the ski masks and hoodies amplify the book's real-world tone.

Bonus Good #1: Essays from real animal activists are included at the end of the comic.

Bonus Good #2: A portion of the profits is going directly to dog rescue. Heroism for real.

The scenes in Damon's "mundane" life are a definite contrast with his nighttime vigilante activities, but (possibly because the activism-in-action is so explosive) they verge on boring. I know that the superhero's alter ego is rarely as interesting as the hero, but I'd love to see more page space dedicated to Damon and Jeanette kicking ass and saving puppies.

LIBERATOR is vigilante escapism grounded in reality. Animal lovers and socially-conscious readers will be disturbed by the things our heroes are fighting against, but find a payoff in Damon's around-the-law actions. I'm expecting things to get worse (in terms of abuses that we'll see a need to solve) and then better (in terms of action and explosive power). I'll be picking up Issue #2 for more animal-saving and evil-destroying, and I'll also be hugging every puppy I see. 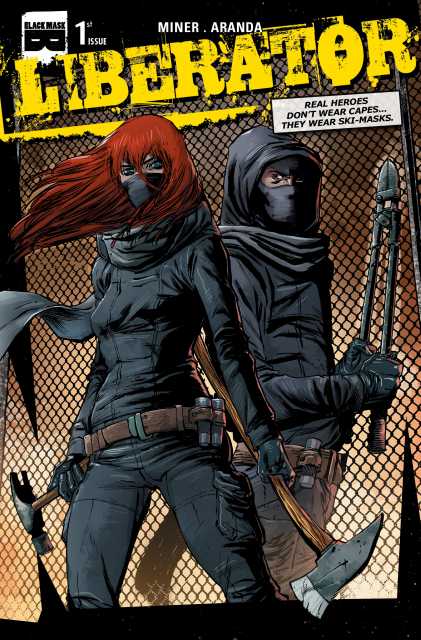