Chapter 3 of The Black Vortex is here!

The Black Vortex moves forward as both Gamora and Beast, both infected with the power of the Black Vortex, find a new ally. Meanwhile, there's trouble in paradise as Kitty and Peter don't see eye to eye on how this situation is being handled.

This issue is filled with some great moments, and most of them happen within the heat of battle. My personal favorite happens when Gamora is fighting Storm and Thanos shows up. However, smarter than the average bear Beast is there and notifies her that it's simply Jean putting that image in her head. Right afterwards, we get another awesome scene as the battle escalates, which I won't spoil. However, this issue is full of memorable moments, which writer Sam Humphries has crafted incredibly well. While the first two chapters of Black Vortex were cool, this chapter raises the bar with numerous moments that will have fans chatting about around the water cooler.

Warren's redesign the super-awesome. It feels a lot like he's back, in a sense, in his Four Horsemen outfit. So far, out of the three characters that have changed, Warren's Black Vortex redesign is the top of the charts. The one page spread debuting Warren is wonderful looking. Paco Medina really does a great job with Warren's new outfit.

As a whole, the art team of Medina, Juan Vlasco on inks, and David Curiel on colors hits a home run, and other sports-related analogies. The artwork is clear, crisp, and never lets the reader down. Not only is the art consistent, but Medina conveys a lot of emotion within the character's faces and the action scene are pretty entertaining and thrilling.

The issue leaves off at a pretty cool place that will rope readers in for a next issue. Without spoiling anything, I will say that as a whole, this is the best issue that The Black Vortex has to offer yet as a compelling story that features characters that Marvel fans love. The issue has a great pacing to it that builds up to a great cliffhanger.

One thing that this book and event are missing is the understanding of why the Black Vortex is a bad thing. The reader has an understanding but it doesn't feel like the characters do aside from the idea of "oh, our friends are different and worshiping this mirror. We have to stop them!"

The newest chapter of Black Vortex is a bit of fun and puts one of the classic X-Men character into a new costume for the event, which is incredibly cool looking. The art and writing are fantastic for the issue, but where this issue of STAR-LORD drops the ball a bit is letting the readers know why these characters find the Black Vortex to be such a threat. Regardless, this is a fun issue and fans of the Kitty and Peter relationship are going to want to read this, as there seem to be some trouble in paradise here. 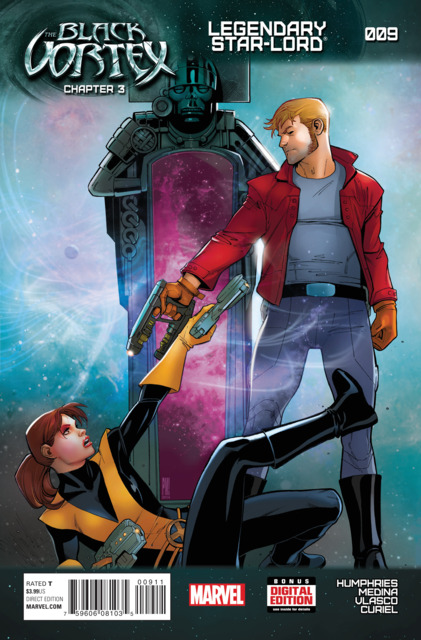