Peter's half-sister, Victoria, heads out to see The Collector.

Before SECRET WARS puts most of the Marvel Universe on hold, the half-sister of Peter Quill, is on a quest to get the body of her father, J-Son, back from the collecting clutches of The Collector. What readers are left with is probably one of the most fun books of the week, which expands on some questions left unanswered in the aftermath of Black Vortex, while moving things forward, which readers probably won't get to see until after SECRET WARS.

The Collector's collection is the best and most hilarious thing in the Marvel universe. The character is obsessive and a bit silly, to the point where he collects his own tears. Yes, you read that correctly. The dude collects his own tears and stores them away. The majority of this issue is about the Collector and everything he chooses to collect. Writer Sam Humphries pretty much gives the user a Collector 101 with this issue. It's a fun a delightful look into the mind of a super-weird, cosmic character.

This issue isn't all about the Collector though. We get to see the early days of Victoria, Star-Lord's half-sister and her early life on Spartax. She lived with J-Son who was a pretty awful father and leader, but Victoria needs her father's body back in order to move forward with her super-secret plan, which actually isn't that secret here. How she gets J-Son's body back is actually what gets Collector to cry, and all of this leads to a pretty fantastic ending, which we won't get to see more of for quite some time.

Andrea Sorrentino and Marcelo Maiolo come together to do an opening page for the issue, which looks pretty great, as you may expect. The rest of the issue features the team of Paco Medina, Juan Vlasco, and David Curiel, and their work is simply stunning from start to finish. I loved what Curiel did with the colors in the flashback scenes here. It really heightens the mood for the scene.

The only time we see Peter Quill is in an image where he's singing for a ska band... wait that's actually pretty cool, but regardless, no Peter or Kitty here.

If you're looking for a great comic to read that also has the Collector crying, then this is the issue for you. Sure, Peter and Kitty aren't a part of the issue, but the Victoria and Collector story stands on its own and it's actually an incredibly fun issue with a great sense of humor, minus the flashback scenes. Those are actually a bit depressing, but give better insight into Victoria and J-Son's relationship. I cannot wait to see what's in store for Peter and Kitty post-Secret Wars, as well as J-Son and Victoria. I highly recommend this issue. 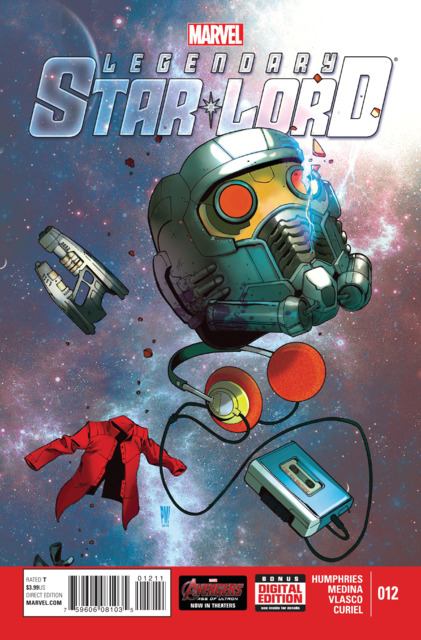