Whatever happened to baby Jonah?

LAZARUS is back for a third arc, and though we don't get to see the aftermath of the latest Lift selection just yet, we're in for a fascinating trip into Hock land. Rucka and Lark are using another Family as a lens for learning more about the Carlyles, and it looks like there are more secrets yet to unpack.

One of the great strengths of the worldbuilding going on in this title is the attention to exactly the right details to set tone. In this issue, we see subtle differences between Hock and Carlyle -- the caption boxes that led us to believe that people were universally sorted as Family, Serf, or Waste now let us know that Family is a constant across territories, but that Hock prefers a Citizen/Non-Person divide. It's a small difference, for sure, but it conveys a lot of information about how Family Hock operates.

Less subtle are the differences that we learn directly via Hock signage and radio announcements -- and Jakob Hock's treatment of Jonah Carlyle. It's simultaneously refreshing and scary to witness the day-to-day operations of areas outside of Carlyle territory.

Michael Lark's designs are always interesting -- in sharp contrast to what we've seen in Carlyle or Morray, the Hock residents seem to take visual cues from Stormtroopers, nuclear scientists, and swamp militia (the latter likely being a factor of geography). It's another reminder that we're not in the West anymore, and it plays well.

The pacing on this issue is a little bit weird at the beginning. Everything gets smoother after New York, but the first few pages drag a bit. It's worth it to keep reading.

LAZARUS enters its third arc and second year with this issue, and it's still very much going strong. I love getting to know more about the vast, rich world that LAZARUS inhabits, and issues like this one -- which convey a ton of information about how things work outside of Carlyle territory -- are great for that. It's also a great time to circle back to Jonah Carlyle, since he's been stewing for a bit after his failed plot. Rucka and Lark tee up another interesting arc, and it looks like we're on the path towards some sort of Five Families-esque meeting with the upcoming Conclave. Intriguing? You bet. 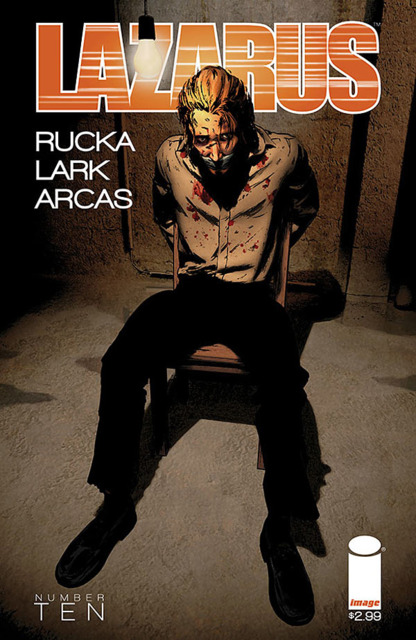