Larfleeze #9 - Of Gods and Greed

Larfleeze's butler, Stargrave, has been taken from him. That's something the Orange Lantern will not tolerate! That's HIS butler!

LARFLEEZE is always a pleasant and lighthearted read, but before jumping into the plot and what not, I have to give respect to artist Scott Kolins and colorist Mike Atiyeh. Issue after issue, these two create pages that are the perfect compliment to the book's ridiculous and good-natured tone. It's a vibrant and somewhat cartoonish style, and this makes it a real treat as these cosmic characters fire absurdly powerful blasts and soar through the cosmos. Yet the book still finds a way to throw an incredible amount of detail in every location and even realism with some characters. The close-ups of Larfleeze are always appropriately appalling. His disturbing gaze and saliva-spewing mouth always manage to prevent the character from feeling static and he's every bit as ugly as he should be. There's nothing here that's quite as jaw-dropping as the double-page spread of the robots bringing Larfleeze everything they have in the last issue, but it's still a lovely set of visuals and totally commendable.

As for the story, this one primarily revolves around Larfleeze showing how powerful he is (spoiler alert: he's very powerful) and comedic banter. This takes up a fair amount of the issue, and while it's definitely entertaining, it's safe to say it's something we've all seen a more than fair amount of in the title so far. Thankfully, co-writers Keith Giffen and J.M. DeMatteis dedicate the second half or so of the book to introducing a couple of very interesting developments. One of them is totally ludicrous but it still works because the two writers play up just how ridiculous it truly is. The other -- which happens to be the cliffhanger -- promises to bring a change to the book's formula while still staying true to its comical and silly atmosphere. Even if you're not the biggest fan around of this chapter, odds are this conclusion will convince you to stick around just to see where the adventure goes next.

The biggest problem here is this all feels too familiar. The battles and the style of humor are very similar to what we've read in the previous issues but, unfortunately, it doesn't do anything to make it feel like an improvement or at least different. Aside from a few plot developments, this is exactly what we've already witnessed in the book before. It's good fun and I'm still enjoying the read, but there isn't anything refreshing that sets it apart from the previous chapters. It doesn't help that I find the family from the other dimension best in small doses and this continues to put a heavy spotlight on their relationships -- which is again something we've seen quite a bit of before. Thankfully, the cliffhanger promises to introduce a new dynamic to the story, so that should help switch things up a little bit in the next issue.

LARFLEEZE #9 is a fun time and makes a promising development for the next issue. However, it has a "been there, seen that" feeling to it. The laughs are still present and the action is still explosive, but neither feels quite up to par with what we've already seen from the series. Despite feeling like it doesn't bring anything new to the table (until towards the end of the comic, that is), it's still an enjoyable issue and I continue to love the visuals. It's just too bad this series is coming to an end with issue #12, but I suppose we'll just have the enjoy the ride while it lasts!

This issue was wonderful

and of the question of the day is should larfleez have gotten his own series?

@lifeofvibe: Well considering how many 5/5s he has gotten, I would say yes. I like that they are focusing on a more "out there" type of character, it's a lot of fun.

I wish this series had a better writer >.< I like Larfleeze but I can't stand this series for the most part.

Shame this is ending its been a really fun book. But I'll still have Justice League 3000, Forever People and Futures End for my Keith Giffen fix. Love that guy. 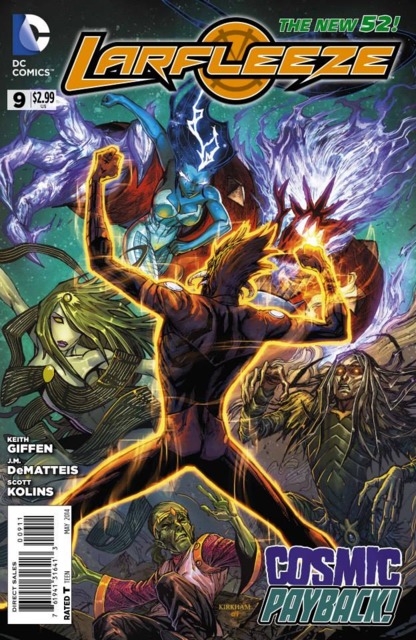