This is the end. For real. Get ready to say goodbye.

Ah, Kick-Ass. I still remember reading the very first issue back in 2008. Dave and the other characters have gone through a lot since then. It's almost hard to believe that this is the end.

The series has had some high points and lows. We've had an abundance of violence, profanity, and foul situations. Mark Millar has never shied away from taking things to extreme levels. But that doesn't mean it's all been about gratuitous violence. Millar has given us a story and we've seen the characters evolve. In this volume alone, Dave is seen going through changes. He's still Kick-Ass but he's found other activities (a girlfriend) to keep him occupied. This, of course, could cause problems in the end. Hit-Girl has also had to evolve some herself. Spending time in prison didn't bring her down, it made her even tougher, as hard as that is to believe (she was pretty over the top in terms of fighting ability to begin with).

As the series and this volume races to its conclusion, we've seen a big set up for this final confrontation. Because it's the end, there's that big feeling of not knowing what's coming. Since it's a Mark Millar story, you know no one is safe. It's an action-packed issue and you'll almost find yourself feeling a little sick in the pit of your stomach because you don't want to see anything to happen to Mindy or Dave. But with everything that has happened, do you think we'd have the characters ride off into the sunset?

John Romita Jr's pencils with Tom Palmer's inks and washes are exactly what you've come to expect and love in this series. I couldn't imagine this series without them. Dean White and Michael Kelleher's colors give the series the right amount of spice. This issue might have a lot of action and violence, but there's still some quiet moments where we can see some normal situations.

How is this ending for the entire series? It works wonderfully. Millar brings an end to certain things but you'll feel satisfied. One might ask, why does there have to be an end? As fans, we don't want to see the end of the characters. It does make sense for their story to end. This isn't a regular comic book world. Sometimes having a story reach an end is rewarding. Sometimes saying goodbye feels okay. I was a little unsure of Dave's fate at the end, but giving it some thought, it does seem fitting.

I've gone back and forth over the main nemesis of this arc. Looking at the big picture, it's good to have some variations within the different volumes. The final confrontation is pretty epic but a part of me wanted a tiny bit more.

It's hard to believe we've been reading KICK-ASS for only six years. It's harder to believe that this is the final issue. We've seen the characters come a long way. Kick-Ass and Hit-Girl have grown. They've suffered many losses and it looks like they can final get some peace. It's hard saying goodbye to characters and seeing a series end. I wasn't quite sure where the series would go when I read the first issue. It's been a blast seeing the characters grow through their highs and lows. Mark Millar and John Romita Jr give us a great ending. It's been a fun ride, but all good things must come to an end. 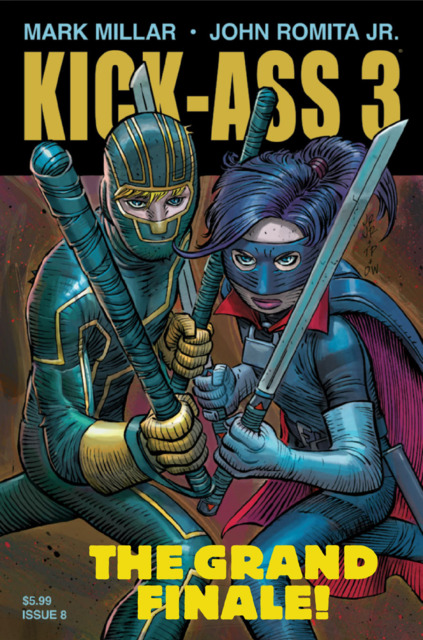