Drama strikes Justice Forever and the big bad, Rocco, reveals his plans. Oh, and Dave argues on the internet about comics.

Just like the cover implies ("real-life civil war!") this issue of KICK-ASS 3 reveals that the final volume of the franchise isn't a basic story of good guys taking on bad guys. Writer Mark Millar previously introduced us to the new "big bad," Rocco Genovese, and at the time, it seemed like a simple narrative. There's a new bad guy in town, Kick-Ass needs to free Hit-Girl and they'll try to defeat him. But this issue reveals it's not quite that simple.

The drama between the villains makes sense and is being flesh out in a manner that's absolutely loaded with potential. If one dude appears to be over the top and power hungry, not everyone is just going to sit back and take orders, right? The conflict with the heroes is entertaining, but the push into "it just got real" status felt a tad abrupt. I'm not sure what kind of a person wouldn't side with Dave in this scenario, but like he pointed out, there's some characters we barely even know. Sadly, Mindy doesn't receive much attention this time around, but that's alright since she stole the spotlight in the last chapter.

The visuals by John Romita Jr., Tom Palmer and Dean White remain strong. There are moments where the quality takes a bit of a dip, but, for the most part, this was a solid looking issue. While the scene of Dave working out and using his computer wasn't anything special in terms of the story, the focus on shading and detail in the darker setting looked really good. Best of all, Hit-Girl's head doesn't seem awkwardly large! That's something which stood out to me during her solo run and luckily that's now toned down and not distracting in the least.

Millar's juggling a lot of storylines here, so naturally some of them are making minimal development and others may not be as exciting at the moment. I'm sure Millar has something huge around the corner for us, but right now there isn't that feeling of an overwhelming buildup and we're halfway though the franchise's last volume.

I understand Dave is okay with trusting Valerie now, but revealing their relationship has progressed to that level right after Dave stressed the importance of not letting anyone know his secret identity felt like an odd choice.

It's more than clear Millar's focused on creating a way more elaborate plot and so far, it's pretty engrossing stuff. The laughs may not be as frequent and the violence is absolutely toned down, but it's impressive Millar's establishing so many different plot points. Hopefully the next issue really turns up the intensity and these different arcs take big steps forward. But for now, this is yet another solid issue and is certain to keep your interest until the next issue lands.

And Dave, next time try chilling out on the Comic Vine forums. I promise we won't annoy you! 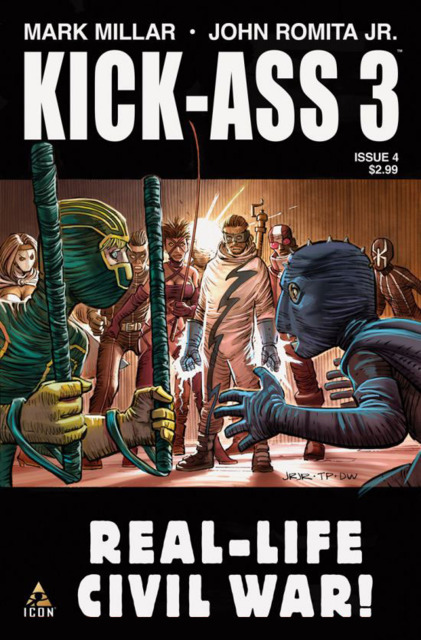