It's time to see how Arthur Curry becomes Aquaman!

*This review contains some spoilers. Don't worry, the important ones are covered in spoiler blocks!*

In an animated universe where Batman and Superman reign supreme, Arthur Curry, a.k.a. Aquaman, is getting some time in the spotlight! To be fair, DC and Warner Bros. Animation did recently give the Suicide Squad and Flash their own movies, so it looks like they're trying to offer more variety with their projects. So, is this the movie Aquaman fans will adore and it'll make them forgive Arthur's absence in Justice League: War? Well, it'll obviously vary from fan to fan, but personally, I'm left feeling like this is a very fun and a very flawed movie.

The handling of Aquaman's story is sure to leave viewers feeling mixed. The look into his past and the heavier material in the beginning is a greatly appreciated dose of character, but then his story races forward and he's just adapting and kicking ass as he accepts this new world and the crazy drama that comes with it. It begins with the potential for a lot of compelling material, but then it seems to rush forward and I lost that emotional connection to the character. As expected, there's plenty of changes from the continuity. I mean, this is just inspired by Geoff Johns' story. Do the changes make improvements, though? No, I don't believe so. It compacts and simplifies the story -- which is understandable since they have a limited amount of time -- but in doing so, it makes many of the elements less powerful and doesn't have room to flesh them out. it covers a lot of ground but never seems to capitalize on much of it. There's glimmers of greatness here and there when it comes to character-driven material, but it has so much to tackle.

One thing I found especially odd was the handling of Ocean Master's assault. Did the people behind the movie think hitting a city with a tsunami was going too far? If so, why not just have Orm's army emerge from the ocean instead of drawing all that attention to where they'll appear? And the military really responded to an incoming tsunami with ground forces? How'd they know the incoming tsunami would magically stop? I'm assuming Batman gave them a heads up about Atlantis, but there's no way they'd know the giant wave wouldn't wreck the cities.

Superman and Wonder Woman's romance is addressed and the way it begins feels pretty forced. I'm all for them dating, but Kal-El basically hits on her in a moment when she's vulnerable. It's a romantic setting, but her mood wasn't exactly saying, "Kiss me, big blue!" A simple holding of the hand would have made the message loud and clear and maybe that could have lead to a kiss. Even if their first kiss does feel odd, the potential it produces is good fun. It does feel like the movie's trying to address too much, but I still enjoyed their "date" and the jokes that are made once others see they're together.

Out of all the characters, I found Cyborg's story to have the most potential. Who would have thought that when going into this one? The romantic subplot seems totally unnecessary, though, and more focus on his situation and how he's adapting to it would have been more effective. Establishing Mera/Aquaman and Superman/Wonder Woman seems like enough, right? As for Hal Jordan and Flash, they're basically there for jokes and to show off their abilities. And you know what? It's good stuff. Hal's giant construct during the big battle is hysterical. Oh, and while we're discussing some of the Justice Leaguers, I'm guessing some won't be too pleased when they realize it's technically Batman who saves the day. Without his quick thinking, Orm would have won.

I have a feeling Sam Witwer's performance as Orm will be polarizing. Some may think it's too much and I'd totally understand that. However, I love the energy he put into the role. It's not the most compelling or elaborate character around, but he seems to really give it his all and that gives the movie a little more life. Meanwhile, Mera -- who's voiced by Beware the Batman's Sumalee Montano -- is one of the movie's highlights. It's a shame she and Arthur didn't have more time together. Still, the character was badass and I'd love to see more of her in the future DC animated movies.

Black Manta felt like a missed opportunity and unfortunately, that seems to be happening with this new universe's big villains. Darkseid was basically limited to screaming and smashing (to be fair, he didn't have any depth in the story the movie was pulling from), Deathstroke was absolutely wasted in Son of Batman, and now Black Manta's appearance doesn't live up to its potential. You're basically wondering why he's doing what he's doing the whole time and then he swiftly explains in a few sentences right before he's removed from the story. And, come on, who decided it was a good idea to show his "death" in the trailer? I use quotation marks because we all know they could still get him out of that. I was expecting him to blast out of the shark and appear for one more fight because I was certain they wouldn't give that away in the trailer. Sadly, it looks like I was wrong. I get the shark scene is cool and an attention-grabber and therefore great for a trailer, but man, that's a bummer.

It should come as no surprise many of the action scenes are a blast. Arthur's opening brawl is a highlight for me because it has so much intensity and feels more visceral than the others. Sure, it's confusing just how durable and strong he is, but watching a drunk Arthur brawl with several guys was terrific. It was just the right amount of brutality and lighthearted fun. I don't want to spoil it, but I will say Superman has one of the most ridiculous and totally unexpected encounters in this movie. It's over-the-top in such a great way. And, as said above, Mera's awesome. You'll absolutely want to see more of her when the credits begin to roll. Another thing the movie handles well is the comedy. I may think several of the arcs are racing forward too quickly, but there's plenty of solid laughs along the way. Even if you're not a fan of the story, the frequent action and humor is likely to keep you entertained.

There's a good amount of fan service scattered in here. There's an unexpected cameo that'll make some of you smile and they even found a way to work in the classic Justice League title. One thing that stood out to me may go over the heads of some viewers. Let's just say part of Aquaman is injured during a fight and it's a pretty cool and organic nod to his unlucky history. Oh, and if you want to be completely surprised by the credits scene, don't read the beginning of the credits! I saw a certain popular character listed in the cast and said to myself, "Wait a second, I don't recall seeing them in the movie. Oh, that's probably because I haven't yet..."

I have a lot of minor criticisms. Like, a lot. I won't list them all here, but I'll go over some of the more noticeable ones. When Cyborg plays the hologram of what happened in the submarine, he puts up a better fight -- something that didn't happen in the previous scene when we saw him being attacked. Maybe he wanted his friends to think he put up more a fight? The way the first scene was edited certainly made it feel like we witnessed everything. There's background characters in a restaurant and they feel like statues that will occasionally blink (that said, one might be an easter egg). I appreciate populating the world and making it feel alive, but when you have humans that close to the characters, the fact they don't move at all really stands out. As someone who loves to discuss comic book fights, I was also a little disappointed by how the boss battle is handled (as well as Black Manta's "big" fight). It's basically the Justice League jobbing one by one and then suddenly Arthur has what it takes to offer a challenge. I get Kal-El has no defense against magic and they want to focus on Arthur, but you'd think there would be a more epic and creative battle here. Arthur's durability and strength appears to fluctuate as well.

Okay, there's only a few more minor criticisms I'd like to bring up. During the island fight, there's fire and smoke before Batman fires his weapons and all that took place was melee combat, so there's no reason why that destruction be there. Also, that scene felt like a missed opportunity to show off Wonder Woman's skill. Instead, she throws creatures from the ocean... back into the ocean? It would be cool if she launched them into the horizon, but here it doesn't seem like an effective attack and there were plenty of other options. I can't be the only one who would love to see her reflexes and skill continue to get extra attention. And speaking of battle tactics, what's up with Billy Batson smashing a vehicle into a skyscraper instead of dropping it back into the war zone? Not cool, Billy.

I was very torn between 3 and 4-stars. As you saw above, I do have a lot of criticisms and I think the movie would have greatly benefited from a longer runtime. Not only does it need to establish Aquaman, his supporting cast and his villains, but it also has to juggle a couple of arcs involving Justice League characters. It feels scattered at times and then rushes towards a pretty standard conclusion. Anywhere from 5 to 10 extra minutes with Arthur could have gone a long way and given us a better emotional connection to the guy. Look, it may seem like I'm being harsh and I'm obviously saying a lot of negative things about the movie, but the simple fact is I still had a lot of fun watching it. Most of the action's entertaining, the early material with Arthur is solid, and there's so many scenes that had me smiling. If you enjoyed Justice League: War, I do recommend seeing it. It may not be as epic or as emotional as some are hoping it'll be, but it's still a pretty good time. 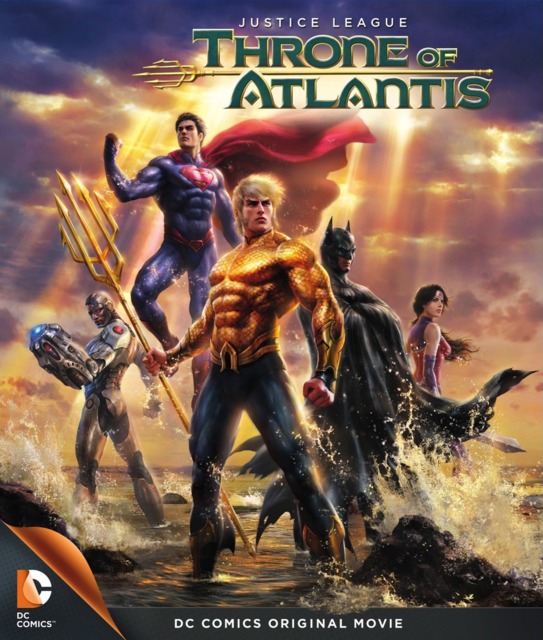