Batman heads back to Gotham with more knowledge than he knows what to do with.

Batman, still sitting in the Mobius Chair, heads back to Gotham to take fighting crime to a whole new level. In case you missed it, during Darkseid War, Batman became the next person to take over the Mobius Chair, which grants all the knowledge to the person sitting on it. What does the world's greatest detective do when he has all that knowledge? He heads back to his own turf to keeps the streets clean, of course.

Something this issue seems to struggle with and it may just be the effects of the Mobius Chair, it's really hard to tell, is that there are many times this doesn't feel like Batman. He does things that feel a bit illogical, especially in the instance where he heads to the prison and reveals himself as Bruce Wayne to Joe Chill. Sure, Joe's memories get erased, but it's just such a bizarre moment that doesn't feel like Batman.

Regardless, that doesn't mean what's happening isn't emotionally compelling nor interesting. It does bring a lot to the character, as Joe Chill created Batman by gunning down his parents when Bruce was a child and all this power means Batman can do almost anything. We get to see that not everything Batman does is something the chair agrees with. When you disobey the chair, you start bleeding a bunch. It puts Bruce in an immense amount of pain and even stranger, he can't even get out of the chair.

What writer Peter Tomasi delivers is a Batman with ultimate power who doesn't let it corrupt him. Sure, he's sending criminals that disobey him to Antarctica, but he is still holding onto his morals, not killing or doing anything entirely crazy. He's still delivering justice in a more efficient way, which is a real cool concept and nice companion piece to Darkseid War.

Fernando Pasarin does pencils for this book, with Matt Ryan on inks, and Gabe Eltaeb on colors. Parasin packs a lot of detail into each panel, including the backgrounds to create a living, breathing Gotham, even if it's just some bills posted on a brick wall or trash in the streets. It's enhancing the scene around the characters. Eltaeb continues to deliver some fine color work on this issue as well, along with all the other books he's working on at DC.

DARKSEID WAR: BATMAN was interesting, to say the least. It really delves into the mind of Bruce Wayne and what he'd do with absolute knowledge. There are some moments that are a little bit of a head scratcher and un-Batman-like, but it's hard to make a final judgement on that because we don't know what the Mobius Chair does to the people sitting in it. Overall, this is a nice addition to one of the best Justice League stories in years. 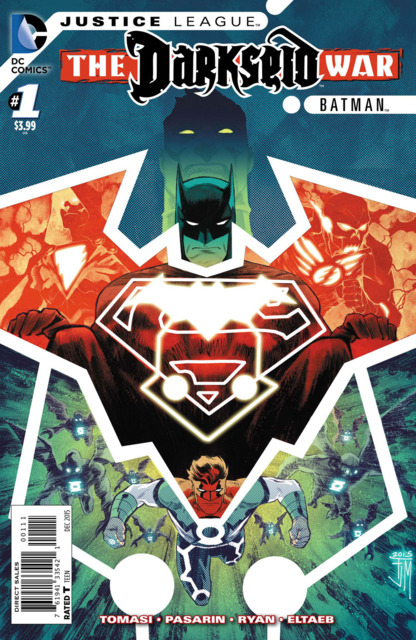