A new Justice League comes together to take on an alien threat.

The Justice League is joined by three new members: Simon Baz, Jessica Cruz, and Superman (the one from the previous Earth). There's a new threat, and it's going to take everyone to bring it down, even if they don't think they're worthy of the role.

This issue of Justice League is all about bringing them together. Writer and artist Bryan Hitch gives these heroes a reason to fight. While the idea that something so large it could take out the planet feels a bit done to death, this is a necessary evil for this issue.The overall story and concept works well, especially for the Rebirth brand. It's very new reader friendly and is a great introduction to these characters. Hitch does a stellar job when it comes to defining this version of Superman though. His scenes with his wife, Lois, were some of the highlights of the issue.

The problem lies in the fact that the issue is a bit dull for the older readers. It feels like a typical Justice League story featuring good battling evil with little to nothing else to offer. Three new members come to the team, and they defeat a threat which will probably return in the future. It's one of the weaker titles for Rebirth as a whole, thus far, especially when it comes to delivering a comic for longtime DC fans. This is a story that would have been great as its own arc, rather rushed out for a single issue, in order to really delve into what makes this team great.

When it comes to Bryan Hitch's art. At times, he's doing some spectacular things, like the two pages after the intro page, where this monstrous beast looms over the city. It has great perspective and shows the reader how big (figuratively and physically) a threat this creature truly is. However, there are numerous times, in battle, where everything feels very stiff and the art looks a tad rushed. There's a bit of inconsistency here, which can take the reader out of the story.

Overall, Justice League Rebirth offers a pretty good starter issue for those who have been out of the DC loops for the past few years. However, longtime readers will find this issue to be "more of the same," with very little pushing the new series forward, aside from new members joining the team. It tells a story that feels a bit too large for one issue. It's a down the middle of the road book. It's not bad. It's not great, but it does make us very curious as to where Hitch is going to go from here, and that's a good thing. 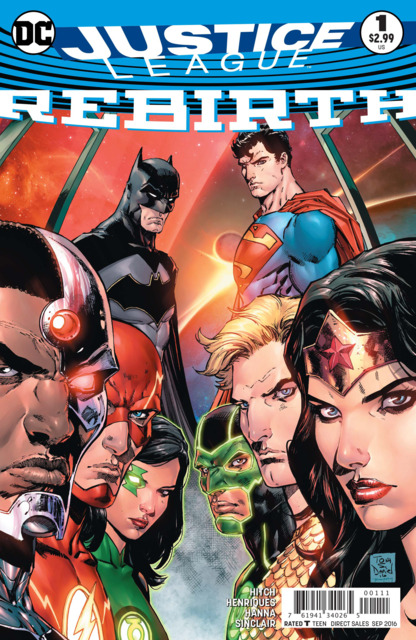