What turned Floyd Lawton into the ruthless man he is today?

Deadshot's pre-52 origin story is quite an emotional and compelling one. So, right when I saw writer Matt Kindt made a big change to Floyd's earlier years, I was immediately concerned over the direction of my favorite Suicide Squader. After all, topping or even matching the original tale would by no means be an easy chore and his origin defines who he is. While I was struck with worry over how things would play out right away, I wound up giving Kindt a slow clap when all was said and done.

As implied, his story undergoes a massive change yet still manages to instill a similar mentality in the character. It's not as gripping as his classic story, but it takes a disturbing direction that'll make your jaw smack the floor. It's twisted stuff and it's absolutely needed when it comes to setting Floyd on his path and molding him into the character we've come to know.

Seeing as it's a Deadshot comic, you can expect a fair share of bullets flying, blood splattering and one or two ridiculous displays of accuracy. The numerous hands working on the art never go too over the top with the gore, yet it's still horrific enough to make the more powerful scenes resonate and hit us with the emotional punch they're aiming for. The past scenes have a more detailed and darker atmosphere to them, further cementing the bleaker vibe and mindset our lead is experiencing. The current, however, has a far more polished and energetic feel to it which is fitting since it has Floyd in his shiny armor and essentially sky diving. There's a lot of people involved in crafting the visuals here, but each style manages to reflect its scene just fine and I never thought a transition was jarring.

Is DC going to move forward and ignore Kot's plot point with the samsara serum? I'm just going to assume so. Also, it's unclear whether Floyd still has a special dynamic with Batman since he no longer had a brother. Perhaps he'll still pull his shots out of respect for being the hero he wanted to be? Or maybe that has been totally thrown out the window?

I was very skeptical about DC diving back into Deadshot's origin. It was superb as is and I couldn't help but wonder if they'd rehash it or take a risk and offer something new. They went for the latter (for the most part), but Kindt did a fantastic job creating a bleak and quite shocking story for the marksman. Furthermore, he's able to tie this issue into his upcoming work on SUICIDE SQUAD, and if this is a sample of how he's going to handle that title, consider me incredibly excited. 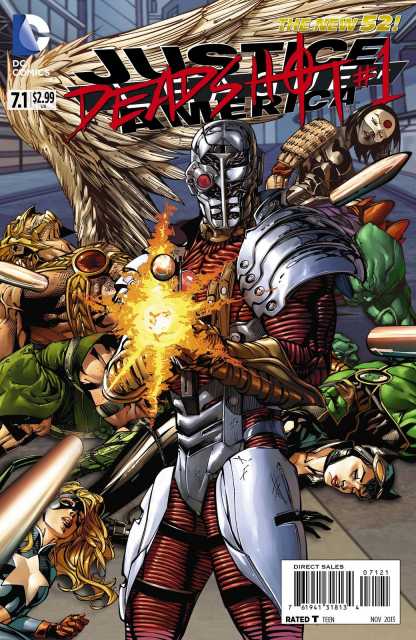