Darkseid War ends and some big developments are laid out for Rebirth.

Darkseid War has been a crazy and epic story. Geoff Johns, Jason Fabok, and others have delivered a story with a gigantic scope. This is exactly what we should have when it comes to DC's biggest and most powerful heroes. Gathering these characters in the Justice League gives the opportunity for big and grand stories. You don't expect them to fight someone like the Ventriloquist (no offense to Ventriloquist fans). You expect them to face the biggest threats in the DCU.

The action escalates as the story and the numerous plot threads come to a close. We've seen some big events fizzle out at the end, but that isn't the case with Darkseid War. While there are certain things we know have to happen within this final chapter, Johns does add some new twists to set the stage for future books. You can't just have characters return to the status quo. Darkseid War will have some repercussions and that's what makes it a compelling read.

The only downside to so many new developments is they will be fleshed out in various books once the Rebirth titles debut. With this being the final issue of this volume and Geoff Johns moving on to other things, we won't see any immediate follow up contained in one series. That being said, it's fantastic to see elements of one story affect several other titles. It adds to the feeling of continuity and reinforces that each story does matter.

Jason Fabok's art and Brad Anderson's colors are top notch. You can see and feel the heat and passion within the story. As you turn each page, the action continues to escalate with bombs being dropped upon the reader. You'll feel the urge to stand up and cheer. When that happens, give in to the urge and do it.

Darkseid War has been a great story that's been allowed to be told at its own pace. We get some big payout as Geoff Johns unleashes some things that will play out in big ways in the post-Rebirth Universe. Jason Fabok's art and Brad Anderson's colors make this a gorgeous issue with plenty of rad moments. Despite how long the story's been, you'll still wish you could have more. Johns does a fantastic job with that. The volume ends with a bang. There may be some unanswered questions that will lead into the Rebirth titles, and that's totally fine with me. A big thanks to Geoff Johns for 50 great issues. He's been joined by so many talented artists and colorists. This issue and DC Universe: Rebirth should really get fans excited for what's headed our way. 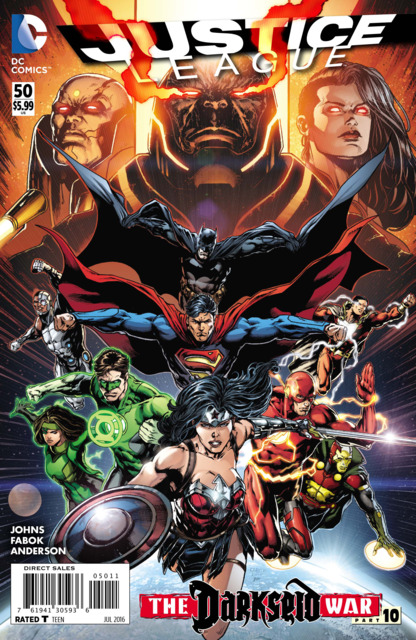