A new baby is born to Superwoman, but what does this child have to do with all of Darkseid War?

DC is doing something comic fans have been wanting for the past few years: delivering a big, event-like story, without it interfering with the other on-going series. Having this large story contained within a single series brings excitement back to large-form storytelling. The reader isn't going to feel bored by a story, 8 months in, when their aren't 2-10 tie-in stories a month to go alongside the main story.

Rant aside, the book is just awesome. It's incredibly well-crafted by writer Geoff Johns, artist Jason Fabok, and colorist Brad Anderson. There are so many different moving parts to the story, especially in this issue, and it all flows extremely well and never becomes overwhelming or confusing. Even minor parts of this story, like Mister Miracle and Big Barda's conversation or Jessica Cruz trying to free herself from the Power Ring, work well within the larger scope and deliver some great characterization, since a few of these characters are newer to the New-52 universe.

The battles are big here but don't take over the entire issue. There are a few moments of awesome power being unleashed, and while this issue feels "action packed," there's actually not a lot of action taking place within the issue. It just feels bigger than it actually is.

The Flash plays a larger role here, and I'm really digging on his dialogue with Lex Luthor. Flash knows something large is about to happen, and he thinks the danger is high enough to warrant everyone running away. Then, there is a HUGE moment at the end of issue, involving Grail, which we won't spoil here. It completely changes how we think this story is going to end. It's a big curveball and will completely catch you by surprise.

As always, Fabok and Anderson's art delivers some stoic looking characters and scenes, completely fitting for this large-scale story. There is a two-page splash, towards the end of the issue, which is a huge spoiler moment for the book. It looks outstanding and Anderson's colorwork and shading is wonderful here. The color is what makes this a great piece/moment. Fabok pays great attention to detail, no matter how large or small the panel is. There is great consistency throughout the book when it comes to the art side of things.

JUSTICE LEAGUE #49 does a stellar job at building on this epic story while getting readers ready for the finale. It's exciting, without being a whole issue of people punching each other. Dialogue is the driving force of the book and Johns keeps everything moving through that while developing some newer characters in some key moments. This is one of the best comics this week, and I highly recommend you check this issue out. 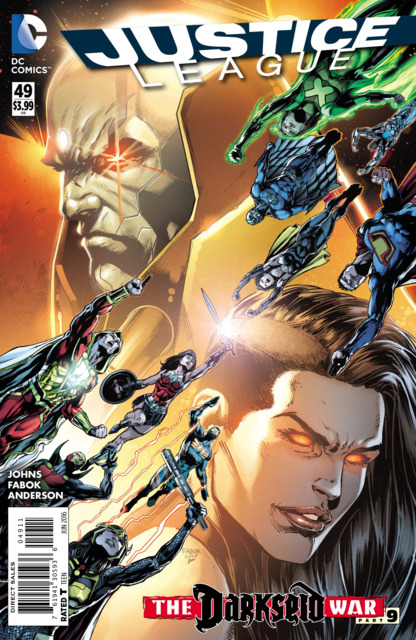