Act Three begins and the Justice League decides to seek answers about the Anti-Monitor from the Crime Syndicate.

There's no stopping Geoff Johns with his current Darkseid War story arc running through the pages of JUSTICE LEAGUE. Each issues feels like we're getting another piece in a big epic story. Thinking back, it's hard to believe we saw a major death when Darkseid and the Anti-Monitor clashed issues ago. Since then we've seen pretty much the entire Justice League transform into New Gods and got to see the changes explored in the various one-shots focuses on different characters.

After a couple issues with Francis Manapul handling the art, Jason Fabok returns. Fabok's return is time perfectly as this issue marks the next act in the overall story and there's plenty of action and suspense for him to draw. Fabok captures each beat and movement of the League whether they're fighting each other or making their move with new allies to confront old enemies. Brad Anderson's colors completes the tone Fabok sets up perfectly.

Each issue of Darkseid War feels like it's taking us further and further into this big story. Reading each, you can't help but sense the nagging feeling that the story will have to come to an end eventually and the status quo of the characters will have to revert to something more familiar. Simply put, this is a story I don't want to end. It's been a thrilling ride and it feels like Johns is getting to tell the story he wants, no holds barred.

The Darkseid War story keeps getting bigger and bigger. With Geoff Johns and Jason Fabok back together, we're seeing more characters introduced into the story and the stakes are being raised. Johns is telling a big story that has been years in the making. We don't often see long-running stories like this in today's comics as they often get wrapped up after a half dozen issues. Let's hope this one keeps going so we can enjoy grand story Johns and Fabok are delivering. There's no stopping the big and crazy ideas they're cooking up in this series. 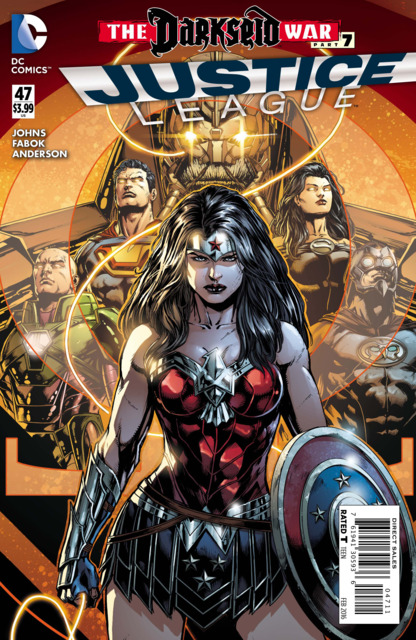