The Justice League are about to get thrown into a war they didn’t even know was coming.

Let’s admit it, there’s been a lot of hype for this story arc. We saw how things went between Darkseid and the Justice League in the first arc of this series. This was the first time Darkseid’s will was denied. He would be coming back with a vengeance. We’ve also been waiting on this “world destroyer” that was mentioned by the Crime Syndicate in Forever Evil. Joining in on the fun is Darkseid’s daughter, her mother, as well as Mister Miracle. With the prelude in issue #40 and the sneak peek in the Free Comic Book Day issue, it’s been hard not to get amped up for this arc.

Geoff Johns is known for having a big picture in mind. He plays the long game. Looking back and this series, you can see the various seeds he’s been planting. He is taking advantage of the fact that he has DC’s biggest characters at his disposal. This does feel like it could be the next big summer comic book event but instead of subjecting us to a multitude of tie-ins, all the action is contained to this one series. What more could we ask for?

The issue starts out with a dark mystery. We see two familiar figures hunting down a certain person. They clearly will go to any means to find this person. It immediately sets the tone and shows this isn’t going to be all fun and games. We are also treated to a wonderful introduction to Mister Miracle. He has been seen in the New 52, in EARTH 2, but his character and background are fleshed out here for those unfamiliar with who he is. When it’s time for the Justice League to come into the issue, we’re welcomed, in a way, by Wonder Woman. Johns has mentioned she would be a central figure in the storyline and it’s great to see her inner monologue instead of Batman or Superman’s. Seeing the team working together to try to get some answers is great, especially since this is the calm before the storm.

Jason Fabok’s art is simply fantastic. I’ve said it before and I’ll say it again, Fabok’s art keeps getting better and better. His depiction of the characters truly does them justice (no pun intended). As if that wasn’t enough, Brad Anderson’s colors adds to the vibe and mood of the story with his choice of colors and lighting.

It’s not necessarily a bad thing but it almost feels like there’s too many characters coming into this story. We’ve seen some characters get nudged out of the spotlight in the past. Hopefully everyone will get a chance to shine at some point.

I am curious about Mister Miracle being here and what he's done since he was last seen. But that doesn't affect the enjoyment of this story.

Often when we read the first part of a big story, there's a lot of set up and the action is often light. That isn't the case here. Geoff Johns has been moving this series towards Darkseid War since the first issue. While we are introduced to some new players, there is plenty of story, character building, and action to keep us glued. Jason Fabok and Brad Anderson's art and colors are phenomenal. There's some big developments and huge twists even though the story is just beginning. Who knows how intense things will get after this? This is like a summer blockbuster movie. Where's my popcorn at? I'll be counting down the days until issue #42. 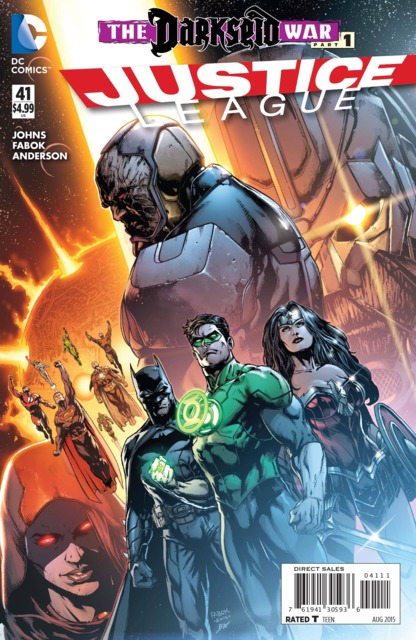