The fate of the Justice League (and the world) hangs in the balance as Wonder Woman must fight her teammates.

When you have a comic series featuring all the big guns in the DC Universe, you expect stories to be equally big. That’s what Geoff Johns and Jason Fabok have given us in this current arc. The Amazo Virus started off as what seemed to be a regular Justice League story but soon took off and built into something much larger. There’s been so much to deal within the team in the aftermath of Forever Evil. Besides having to deal with Lex Luthor (and Captain Cold) on the team, they soon discovered Luthor was responsible for an extremely deadly virus that was affecting pretty much everyone. The tables soon turned as it was up to Superman, Batman, Wonder Woman, and Luthor to try to save the day. Even the ‘always prepared’ Batman couldn’t fight the odds for too long. This left us with what seem like a comic book cliché, Superman, Wonder Woman, and Lex fighting the rest of the Justice League. Regardless if hero fighting hero is a cliché, we get some pretty epic moments.

Johns could have easily relied on Fabok’s drawing skills to bring this story to a close. Instead, in the midst of the fighting, we do see some really great moments between Wonder Woman and Lex Luthor. Wonder Woman is meant to have a big presence. Johns has really cranked this up lately and the way she addresses Lex, you feel he has no choice in the matter. Superman is also forced to make a choice. This might be the end of the story but there should be some interesting consequences to follow.

The more I see of Fabok’s art, the more and more I dig it. Going along with what I said before, this should be a BIG book. You want big stories and great art. Fabok is killing it. Add in the color by Brad Anderson and you get a really really nice looking issue. Let’s hope Johns and Fabok stay together for some time.

I was a little torn with the notion of the Amazo Virus. This story does reach a satisfying conclusion with a lot more to explore in future issues.

The Amazo Virus story might be over but there’s some interesting things that will come out of this. We’re still seeing the Justice League try to get used to the idea of Lex Luthor and Captain Cold on the team. This issue really puts them to the test and shows what they’re capable of when fighting alongside the team. Geoff Johns and Jason Fabok are delivering a nice juicy series with glorious over the top action and visuals. But it’s not all non-stop action as we do see some cool character development as well. I can’t wait to see what’s coming up next in this series. With The Darkseid War coming up, these guys must just be warming up. I have a feeling things are going to get pretty bonkers. 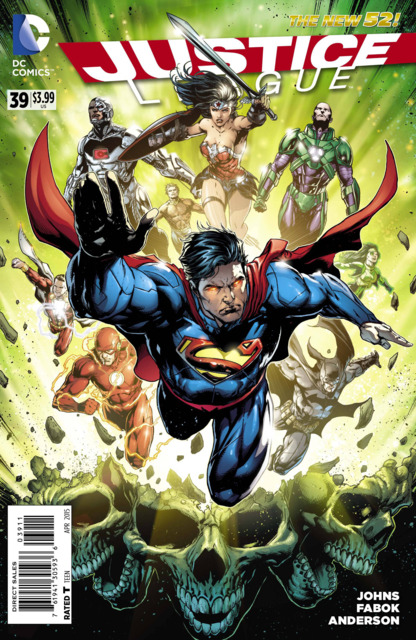