Someone has targeted the Justice League and they make a move against them in a big way.

When this series first started out, we didn't get a lot of insight into the individual characters. This could have simply been due to the fact that (most of) the characters each had their own titles where they could be fleshed out. Lately Geoff Johns has been adding a personal touch to little details that speak volumes (such as Superman and Wonder Woman's sense of not fitting in with the rest of the world).

In a move that will make continuity-driven fans rejoice, the comic opens with a scene at the Batcave. The dialogue or issue doesn't heavily focus on the recent and tragic events in Batman's life but the fact that it is mentioned, in a great way, let's us know it does have an impact on this title as well. Along with this, Johns allows us to explore the Batcave in a way we don't often get to. Of course Ivan Reis (and the various inkers) should be given credit as well. Every time the Batcave appears on a comic and is drawn by someone else, I always pay close attention. It's fascinating to see each artist's interpretation and trying to find similarities and new items is always fun. Rather than just give us a brief run through of the 'cave, we see some things we haven't seen before. It was enough to put a smile on my face.

Before you start thinking this is all about Batman, it's not. As something interesting happens there, the attention turns to Superman and Wonder Woman. They are continuing to spend more time together, again because of the connection they've formed. These two are pretty much on an equal level and Johns shows us how similar and different they can be. It's not just another date out for a bite to eat this time. What they do will have serious repercussions. You can also see how this will fit in with JUSTICE LEAGUE OF AMERICA.

There is also more on the development of the added roster. We see the new Atom and Firestorm trying to figure out their place on the team.

We get more on Shazam and Black Adam. Johns continues to reveal more to the story and Gary Frank draws it the way only he can. You can feel things are drawing to a close and seeing how these characters are unleashed upon the rest of the New 52 Universe is something I'm deeply interested in.

While the cover makes an interesting twist, as with most of the other gatefold covers this month, it's a scene that doesn't really take place. There are elements of it that are true but it feels more like a mislead rather than focusing on the actual story.

I have been enjoying the Billy Batson/Shazam story but partly due to the limited pages the story has to be told each month, it feels as if it's taking a long time to complete. It would be nice to see and read the entire origin in a collected format. There's also been some speculation as to how Billy would transform or introduce himself to others if he has to say "Shazam!" in order to change. We sort of get an answer here but it's not entirely clear.

There is a pretty big development in the Batcave scene. It is reminiscent of another big Justice League story. Of course it's too early to say if the current events will touch on that previous storyline. In some ways it could be good to see it play out again to reinforce it's presence in the New 52. At the same time, we don't need to see a story retread. That doesn't seem like something Johns would do. But the scene is still pretty dang cool.

In the beginning I was super-excited for this title in the beginning with the team of Geoff Johns and Jim Lee. The series has had some ups and downs but we are definitely back on track. Johns is setting up some big things in recent issues and you can feel the intensity building. Johns continues developing the characters in their presence on the team and touching on more personal matters with the members adds life to them and the book. Seeing new members Atom and Firestorm felt a little odd as they weren't really incorporated into the main parts of the story and we're still not fully aware how they'll fit in. A big development feels reminiscent to a pre-New 52 story. Either way, it looks like things are going to get really crazy, in a good way. The back up continues the story of Billy Batson's origin. It's interesting but the back up format is making it feel as if it's dragging on. Let's see him move beyond the origin already! It is clear that Geoff Johns is preparing to take the Justice League and readers to the next level. 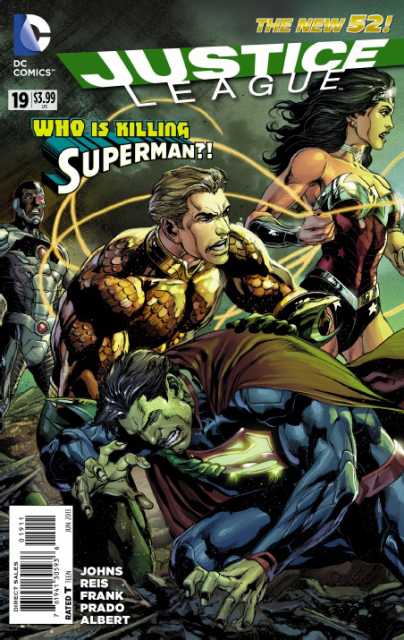