How long can Chloe and Hutch hope to elude Brandon and Walter?

After issue #3's big cliffhanger, writer Mark Millar doesn't decide to show step by step how this new regime comes to power and implements its various changes. Instead, the co-creator of the series decides to make the book jump forward in time to show us how everything is "progressing" now that they're finally in charge and several changes have been put in place. After all, who would want to read an issue full of debate and the characters elaborating about the 600 page plan rather than see it actually put into action?

It's not a jarring transition, either. We're eased into this new world and the issue is primarily decided to showing us that, as expected, Walter's grand plan isn't going quite as smoothly as he expected. This plot point also continues to thrive on how Brandon's being manipulated. Major changes aren't delivered on that front, but just enough is shown to give us an update on how their dynamic is coming along and you can sense the conflict is slowly growing within Brandon. Additionally, the final note seems to promise things are going to once again get quite intense in the near future.

This fourth chapter also teaches us all about Hutch and Chloe's son -- you know, the kid on the cover. The dilemma they're facing is one we're very familiar with (e.g. can't use their powers so they can remain hidden from the powers that be), yet the introduction of this optimistic and good-hearted child sets a surprisingly charming and pleasant tone. Seeing as "charming" and "pleasant" aren't the words that come to mind for the first three issues, it's an enjoyable change of pace... even if it's likely going to be a short-lived one.

On top of creating a new world and establishing a new character, Millar chimes back in on what went down on the island -- no, there isn't a smoke monster. I'm glad because, after three issues, I was thinking this may be something that's literally swept aside and we're just left to believe "they went there and got powers. Come on, accept it because weirder stuff has happened, right? Move forward, not backwards!" The flashback strikes us with a major reveal, teasing a much bigger picture and generating more intrigue. Millar's hinting at a vast scope here (off world drugs, anyone?), so I'm very curious to see if (or even when) this book will take more of a sci-fi turn.

As Millar generates a whole new world, Frank Quitely and Peter Doherty do a fine job immersing us in its bleak and unforgiving atmosphere. Everything from the vandalism to the darker tones and cloudy sky helps pull us into this universe and understand the struggles the planet is now facing. That said, they also deliver big time with showing us how lush the island is and how dry and barren the following location is.Truth be told, Quitely's character work tends to be hit or miss for me. Sometimes it feels like the characters have this odd texture to them, basically appearing too wrinkly. However, that's not the case in this issue and the cast looks solid. I especially love how you can see the frustration and anger so clearly on Brandon's face.

Showing the struggles of staying hidden produces some sweet and amusing moments, but one feels just like a scene from The Incredibles. It isn't necessarily a "bad" thing, but seeing as this issue is mostly buildup, it has to establish several facts, and this means jumping from scene to scene without ever doing anything too stellar. it's a great issue that covers a lot of ground, but nothing here boosts it to 5-stars for me.

JUPITER'S LEGACY #4 is all about creating the new status quo. We jump forward several years and see firsthand how the last issue's cliffhanger has impacted both the world and the main characters. Basically, it exists to do a whole lot of world-building and thankfully, it's well-paced and engrossing. Enough intrigue is sprinkled here and there to make us interested in seeing what the future has in store for us and Millar sets the stage for a new and legitimately likable character. Sure, JUPITER'S LEGACY is clearly inspired by quite a few stories we've seen before, but it continues to expand its scope, provides an amusing commentary on the modern world and absolutely has me wondering what'll happen next. 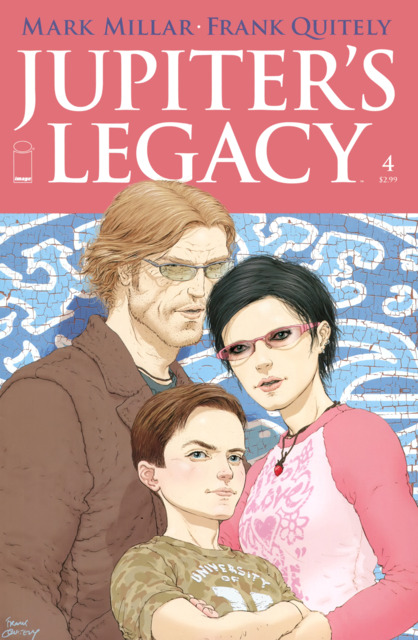