Jem and the Holograms

Jem and the Holograms are back for both the new and old generation. See how it all begins.

With JEM AND THE HOLOGRAMS, we have another revival of an older property in comic book form. Those that have ever watched the animated series will be eagerly awaiting to get their hands on this issue. While the comic might not be for everyone, it's fantastic to see more variety like this on comic book shelves.

In this new first issue, we're introduced to an all-female rock band. Gearing up for a big contest that would jump start their career, they're facing one problem--their lead singer, Jerrica, has a bit of stage fright around others. As you can imagine, that's a pretty big obstacle to deal with.

Throughout the issue, we do become more acquainted with Jerrica's sister, Kimber, and the others. We also discover that there's more going on that just a story about a band. We have an interesting hook and solution for this problem. You can't help but be curious as to how this will drive the comic and what the future stories will deal with.

Kelly Thompson and Sophie Campbell do a great job in creating a fresh new vibe for the characters without completely changing what older fans will recall. The colors by M. Victoria Robado also adds to the shine of the book. With a lot of this issue taking place in a studio, I'm really curious to see how future issues will look. We do get a nice mix of perspective and detailed expressions on the characters.

It's likely that we'll see new fans reading the comic versus fans of the original show. It might be a little unclear what this series will be about. This issue does serve to introduce readers to the characters or reacquaint them so we'll probably have to wait until the next issue to really get into the heart of the series.

Minor changes to characters might bother older fans. But they are minor changes.

If you've ever watched Jem and the Holograms or have been interested in them, you need to check this new series. out. Kelly Thompson and Sophie Campbell are bringing the band into the 21st Century with a nice modern feel that doesn't stray too far from the original designs. It's always refreshing to see different sorts of comics on sale and JEM AND THE HOLOGRAMS will definitely appeal to a wide audience. Whether you're a new or returning fan, this is a comic you can easily dive into. 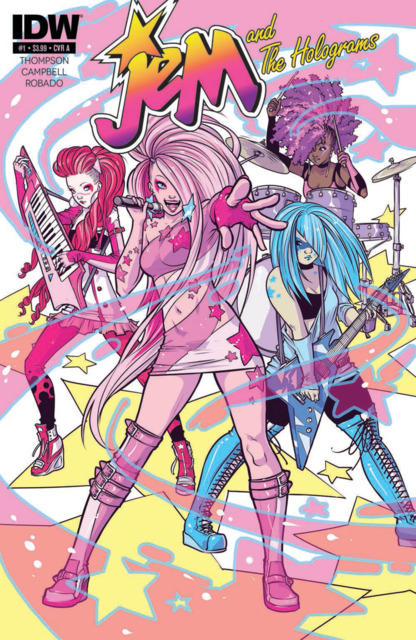