Jeff Steinberg finds himself representing Earth after sitting on the toilet.

Jeff Steinberg is a normal guy, whose roommates rely on him to fix the television. Jeff is teleported to an alien vessel in order to represent all of humanity in a series of challenges. If he loses, we all die.

Champion of Earth feels like it was written for me or at least someone my age with similar life experiences. It's filled with pokes and jabs at pop culture: the same pop culture events that nerds have all talked about at one point in time. This isn't the same slapstick type of writing Joshua Fialkov showed us in Punks, there's a great level of humor to the first issue. Not every moment is laugh-out-loud funny, but the book feels like the creators are having a lot of fun, and it will easily bring a smile to the reader's face.

As for the story, it's something we've seen before: an unlikely subject receives the call to arms to be a representation of his people. It's a common story, and we've even seen it a few times with aliens. What sets this book apart from those other similar stories is that it has this adult animated feel to it. Think of it more in the tone of early Adult Swim shows more than anything else (Mission Hill [we're aware it appeared on the WB first], Sealab 2021).

The first issue is double-sized, which gives this story a lot more room to breathe, so the reader can meet the characters and be introduced to the world. It, overall, helps a lot with the pacing. Artist Tony Fleecs and colorist Luigi Anderson deliver some fun, animated-style art, which is a wonderful compliment to the tone of the book. Again, it enhances the Adult Swim feel of the book. The colorwork during the space sequences works nicely and gives the book some depth as well.

The first issue of Jeff Steinberg: Champion of Earth is an entertaining read. While it does pull from a lot of familiar elements, overall, this book speaks to an older comic reader in ways most series don't. It's an issue that shows a couple of creators having fun and including the reader in said fun. 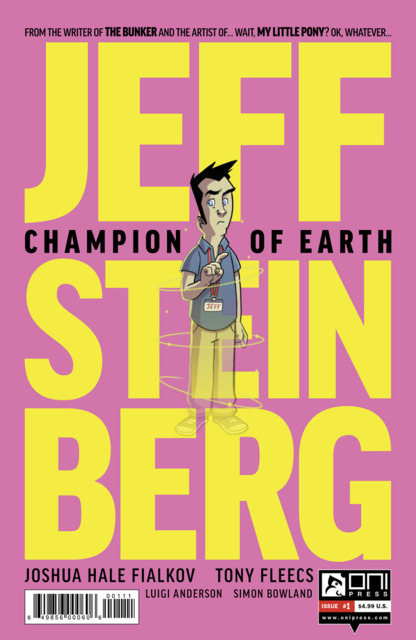