The tension has been building between the Inhumans and mutants. A battle is about to explode across the Marvel Universe.

A conflict between the X-Men and Inhumans has been brewing for some time now. With the release of the Terrigen Mists in the atmosphere, mutants discovered it was a deadly threat to their existence. We just saw the moment this was discovered in Death of X and Beast's decision to work with the Inhumans to find a solution. The truce between the two is over as mutants are now facing a firm deadline.

The X-Men have been busy running around helping other mutants evade the deadly mists. With the threat of the mists reaching an unavoidable level, it's time for mutants to make a last stand.

Charles Soule and Jeff Lemire have crafted reason for the X-Men to declare war on the Inhumans. We've seen skirmishes before, and it's hard not to think about past battles such as Avengers vs. X-Men and even Fantastic Four vs. X-Men. The situation here is at a higher level. All the cards are on the table, and it's not looking too good for the X-Men. It turns out they've been planning a strike since Death of X. Seeing the decisions play out and some of the first strikes makes this an intriguing issue.

It's always a joy to see art by Leinil Francis Yu. The fact that there's a lot of characters he gets to draw here is an added bonus. Unfortunately, there are some panels that look like they're inked a little heavily. There are some dark and almost muddled moments. It does still work for the most part. Combined with David Curiel's colors, the look does fit the tone of the book. This isn't an upbeat story, and the moments with shadows adds to the ominous vibe.

Readers have had some concern over the fate of the X-Men. Things continue to look bleak, but Soule and Lemire are making sure the mutants don't go down without a fight. While past events with teams fighting each other have been heavy on the flashy action, the fight here is more subtle and precise. Yu's art shines at moments and gives us something to look forward to in upcoming issues. There is some trepidation among X-Men fans, but we know the ResurrXion titles are coming next year. This is a story you won't want to miss to find out what happens next for both groups. 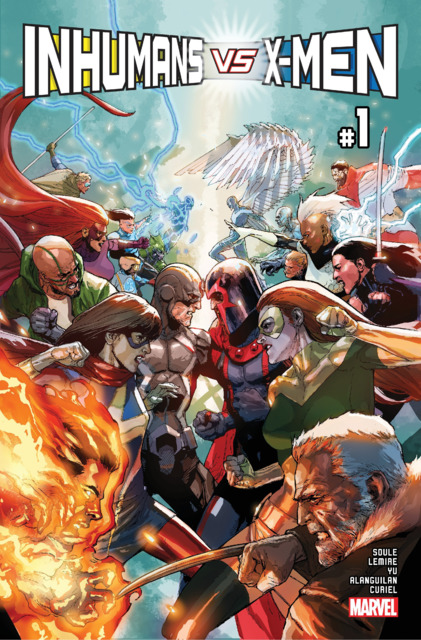