James has to work with a man who controls him, while Terrence is being tortured.

IRON PATRIOT isn't just about a man in a clunky, iron suit punching bad guys in the face. It deals a lot with family and the lengths family will go to protect each other. Writer Ales Kot does a great job at creating the family dynamic between James, Lila, and Terrence Rhodes. There's a few moments within this issue that really show how much these guys love each other. It may not be the traditional sense of love we all know, but Iron Patriot suits beating up bad guys is a much better read that 20 pages of hugging.

This new character, who is controlling James and labelled as "The Villain" in the opening credits, is very cool. He has a very committed to his plan and considers himself the hero of the story. The best villains are the ones who believe they are doing what they're doing for the betterment of mankind. Kot is slowly building on Rhodes' world and adding to it, while remaining true to who the character is. Plus, this issue ends with a pretty awesome cliffhanger that has this new villain up against something different but familiar.

The star of this book is the art from Garry Brown and the colors of Jim Charalampidis. Visually, without a doubt, the book is extremely pleasing to the eye, but artistically, this book really moves along the story. Brown has a gritty style that is sometimes accentuated by Charalampidis' colors. He compliments Brown's work exceptionally well. Brown has some great page set-ups throughout this book, especially during high-action sequences. Lastly, the final page is wonderful. Brown really sets up something wonderful looking here.

Although Brown's art is pretty awesome, there are a few times where it doesn't work. Throughout the issue, there are a small number of times where Brown's style doesn't lend extremely well to close-ups. It looks a bit rough and can take the reader out of the scene.

In addition, the story is good, but not great. It's the type of book that's only going to be a real hit with a certain type of mindset. It's not a heavy-politics book, but those who are intrigued by government corruption fighting the system will enjoy this a whole lot more than the average comic book reader.

Kot, Brown, and Chralampidis provide readers with a book that's one-part family, one-part fighting the system, and one-part eye candy. This book is surprisingly good, considering it features a character that has had a few struggles in the past with his own on-going. This may not be the best jumping-on point, but this is still a series that is worthy of being on fans' pull-lists. Overall, I highly recommend this issue. 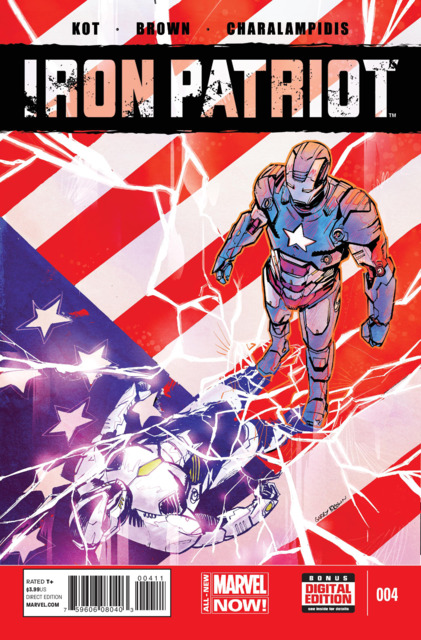