James Rhodes is back in the suit and struggles with being the Iron Patriot and a member of a family.

What IRON PATRIOT #1 does incredibly well is delivering a new series that new fans can easily jump onto. Writer Ales Kot executes a grand introduction to not only the character Iron Patriot, but also gives readers an insight into his family dynamic with his father, Terrence Rhodes, and James' niece, Lila Rhodes.

Kot really starts this series off with a bang by giving readers a full, fleshed out world, complete in a single issue, without the book feeling rushed or poorly paced. Everything flows incredibly well right from page one, which opens up with where this book is eventually heading. That's what makes this issue a pretty good standout. It gives the readers everything they need to know about the series, right from the get-go.

The art team of Garry Brown and colorist Jim Charalampidis do a fantastic job with this issue because it gives the series a distinctive look and feel that really envelops the reader into the story. Charalampidis' color palette fits very well with Brown's art style. The color transitions are soft, but have hard edges, which is a very stylized choice for the book. Brown's art really shines in the moments where the reader catches a glimpse of the Iron Patriot suit. It looks fantastic, bright, and sleek. Brown's style works very well with the suit.

The only real problem here is the art from Garry Brown. For the most part, it's fantastic; however, close-ups on James Rhodes are a bit shaky, mainly with the head-on shots of his face. Things look a little skewed, especially with eye placement and angles on Rhodes' face.

IRON PATRIOT #1 does a fine job of establishing this character and world he lives in. It also gives readers a fine look into the direction this book is heading. Kot focuses more on the Rhodes family and Rhodes connecting more to his home country. Brown's artwork isn't exactly traditional, but for the most part, it really works well in this issue, along with Charalamidis' colors, except with straight-on close-ups of Rhodes, which look a tad awkward. All-in-all, this is a promising start to a new series, and while it won't blow readers away, it will easily keep them invested in the character and the future issues of the series. Overall, I recommend this issue. 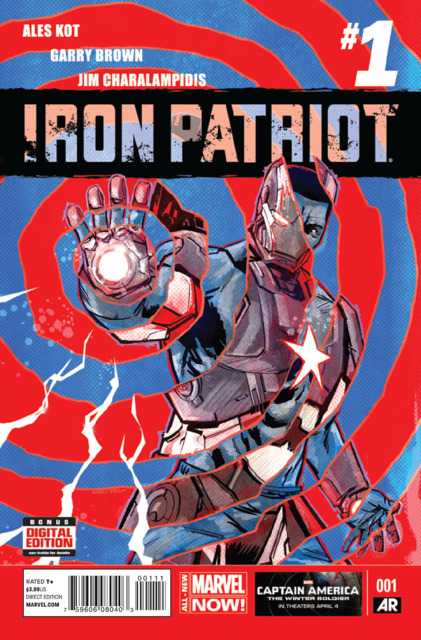