Iron Fist lashes out after seeing what has happened in K'un-Lun.

Kaare Andrews is taking Iron Fist on a twisted road, but when all is said and done, it's his artwork that's really leaving an impression. The rough and often gritter approach matches the book's tragic tone incredibly well, especially with the heavy use of shading when things get dark -- and that's quite often. He also delivers big time with the colors on more than a few occasions. There's a stunning display of chi and it'll likely make your jaw drop. Visually, it's a very satisfying book and it really drives home how messed up this latest tale can be. To top it off, it's not all depressing and violent! Young Rand and Pei -- when they're not covered in blood or have a face full of tears -- are absolutely adorable. There's also a nice bit of physical comedy when the hospital brawl begins.

When I saw we were diving into Danny's past yet again in the previous issues, I was concerned this would take a toll on the pacing because it's covering very familiar territory and, well, we all know the outcome, anyway. Thankfully, Andrews is able to balance both timelines well and, instead of having two completely different narratives, the past is used to effectively compliment the present's story.

I won't lie, I was really worried when I saw what happened to K'un-Lun. I feared the development was essentially wiping away IMMORTAL IRON FIST's creations and paving the way for an all-new set of supporting characters and villains. Luckily, not nearly everyone was wiped out and a number of characters still remain. That said, there isn't much exposition for them, so I can see the inclusion of the supporting cast being a little confusing to new readers.

This cliffhanger is sure to be polarizing, but keep in mind it's just the initial reveal. We need to wait and see how it's handled before judging, after all. Even if you're not pleased with the character's identity, we need to at least see how this came to be and what it means moving forward. At any rate, I definitely never considered this an option, so I'm curious to see how it'll be executed.

This volume is taking a much darker approach to Danny Rand and the latest developments do justify a drastic change in his emotions. However, the depressing tone is laid on too thick at times. Having the word "DEATH" written across an entire panel (twice) feels unnecessary when the impressive artwork alone speaks volumes and conveys the bleak message all by itself. Additionally, Rand saying he only has two kinds of dreams -- and both are violent nightmares -- feels out of character. I get if we're shifting him into a different atmosphere for the sake of the story and I wouldn't complain if these are two dreams he has often, but those being his only dreams doesn't seem fitting for the decades upon decades we've seen of the character. Sure, his life has been hit by tragedies, but this comes off as a little over the top and trying a little too hard to keep things tragic.

IRON FIST: THE LIVING WEAPON #3 is a character-driven experience that attempts to balance fun and darkness, but mostly sides with the latter. Sure, there's a nice dose of levity with the hospital scenes and one specific moment in the past, but in the end, the more dire moments overshadow them. Andrews' artwork remains gripping and he dishes out some major developments in the chapter -- developments which can help me understand Rand's more stern and savage mindset in this volume. I'm sure many will have strong knee-jerk reactions to the cliffhanger, but we'll just have to wait and see what happens next! 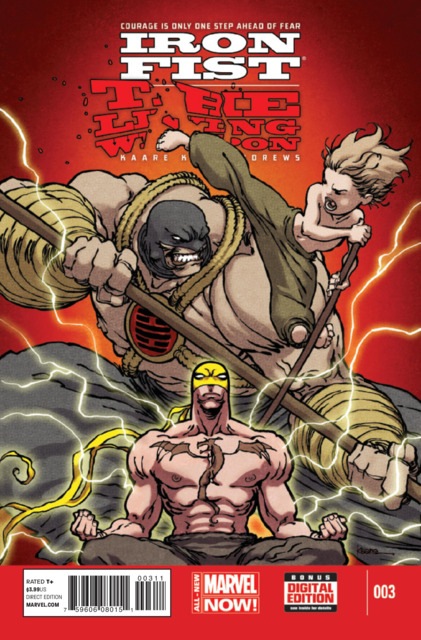