The Lizard League is ready to cross the barrier from B to A-listers, and their first target is the Guardians of the Globe.

There’s been a plotline bubbling under the surface of the last several issues of Invincible Universe. A plotline involving perennial superhero punching bags the Lizard League and it’s time for the plan to spring into action, and it looks like they may have more of a handle on their situation than anyone thought. Even as disdain and jokes are hurled at them, the Lizards respond with an unexpected, well-coordinated cold-blooded onslaught. Phil Hester has been carefully crafting and building toward this in previous issues, and it is, as always, great to see this tie into the core storyline (in this case Dinosaurus’ abandoned lab filled with unclaimed horrors of technology) of Invincible. We also get two glimpses of our core characters as we see Black Samson defend his choice of profession at a charity event and Chupacabra face his inner demons with the help of his unlikely sponsor. By having these storylines at the beginning of the issue, rather than interspersed throughout, Hester avoids jarring the pace and keeps everything smooth running, particularly as he ties Knockout and Kid Thor’s honeymoon directly into the beginning of the fight against the League.

Todd Nauck’s art shines as an amazing compliment to the story. This is one of the more purely superhero books on the shelf, and by that I mean that it’s not really anything else, and that's not a bad thing. It's not a story of sci-fi or espionage or dark, grittiness, it’s about people with superpowers doing superpowered things and Nauck’s art has always perfectly captured that. Everyone is JUST exaggerated enough proportionately and in terms of their facial expressions, but not SO over-the-top that they become unrelatable and the ever-present Gabe Eltaeb’s colors highlight everything perfectly, bringing a vibrancy and beauty to the book that’s impossible to look away from. They make everything seem even more significant, from the free-flowing battle to things as mundane as a charity lunch.

As well paced and blocked as the battle is, there are times when it becomes a little too easy to lose track of its participants, particularly where certain attacks come from and where certain characters wind up going. I get that the big reveal at the end is critical, but it feels a little like certain people just vanish or very convenient and specific attacks come from nowhere. I can’t get more specific without spoiling, but it’s a very minor point in any event.

I love the world building that this book engages in. If you’ve wanted to get into the vast, beautiful world of Invincible, there’s no better gateway and if you’re already there, there’s no better companion. There’s nothing that makes a world feel more inhabited than seeing what its supporting cast is up to when the camera’s on the big guy, who actually even makes an appearance this issue. It’s brief, but it’s absolutely perfect. 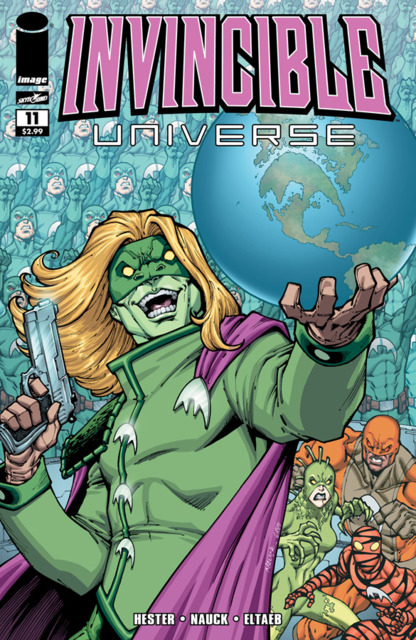