Riri Williams gets ready for her own armored adventures.

Who is Riri Williams? We were introduced to the 15-year-old in the previous Invincible Iron Man series. As a student at MIT, she was able to create her own suit of armor and decided to embark on a new path in life. As a first issue in a new series, readers find out everything they need to know about this new character. We knew she was smart enough to build a suit, but we find out what makes her decide to use it to make a difference.

There is something refreshing about Riri. When a character is created as an offshoot of an existing one, something is needed to make them stand out. Riri is as far from being a copy of Tony Stark as possible. With younger characters, there is more of a sense of innocence and enthusiasm. We need more characters full of hope and optimism these days.

We have seen some great Iron Man adventures over the last fifty years. Unfortunately, some will see this book as a reason Tony Stark is not around. Regardless of the outcome of Civil War II, we all know his story is far from over. We may have to wait to see what's next for him, but the focus here should be on Riri growing as Marvel's latest great hero.

Stefano Caselli's art and Marte Gracia's colors are great here. In some books, you'll see young characters drawn like miniature adults rather than actually looking their age. Caselli makes kids look like kids. The colors are vibrant and adds warmth to the story, even if a big battle is underway with a bunch of strange creatures flying around.

This is a good first issue, but it does leaving you wanting a little more. That's a good and bad thing. Because we've been introduced to her before, we had an idea what she was about. Seeing her past was enlightening and does further define her character. There is a lot of development and the stage is now set for some exciting times.

Riri Williams is ready to become the latest new hero in the Marvel Universe. Despite having roots in the previous Iron Man series, Riri is her own character. This isn't the first time we've seen another character step into Tony Stark's shoes. Riri will inspire new sorts of adventures for readers. Caselli's art and Gracia's colors are brilliant and further gives a reason to return for more. This may be a set up issue, but we do have a lot to look forward to. With her excitement and enthusiasm, Riri Williams is the sort of hero we need right now. 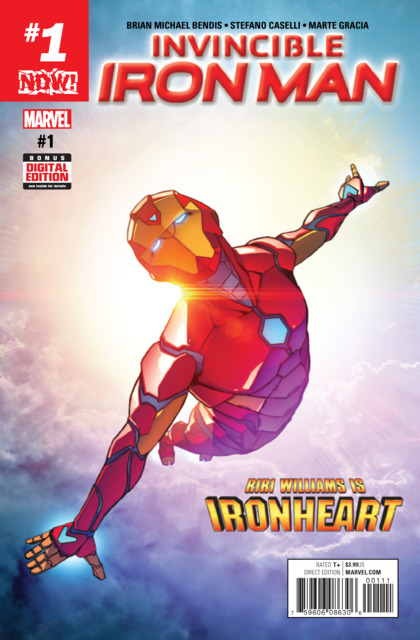