Last issue saw Angstrom Levy very nearly have a change of heart before being dragged into another dimension by an evil Invincible after having assailed the Grayson household and attacked Eve without realizing her superhero identity. This issue takes a moment to catch its breath, showing Mark and Eve preparing for their new child by building a crib and talking about their future. We see Nolan on the Viltrumite warship decide the fate of the deposed Grand Regent Thragg and it's a decision that certainly bucks Viltrumite tradition and angers more than a few people. All this while Amanda and Rex go out for dinner and Rex finally confesses what’s been on his mind and causing him to have such tunnel vision lately. It’s always great to see what characters who live in a world as absolutely insane as Invincible’s do on their downtime, and this is a great example of that because it dodges being too fillery by opening whole new plot threads. Robert Kirkman is the absolute master of this technique: keeping so many plot threads open at once without losing track of any and while always opening new ones in the midst of closing others and this issue is no exception. It’s also a great jump-on issue if you’ve been meaning to get into the title (and it’s absolutely worth getting into).

Ryan Ottley’s pencils, alongside Cliff Rathburn’s inks, have come leaps and bounds in terms of style over the years and part of that has to be owed to the bombastic, incredible colors of John Rauch. The art on this title in general has always been top-notch, the characters just exaggerated enough to make them larger than life, and to give the artists a great canvas with which to express themselves. Emotions are clear and impactful, the action is over-the-top, but still maintains a great deal of the drama and the humor is absolutely hilarious, especially when Invincible thwarts a bank robbery.

Invincible, as a title, does a “jump-on” issue a little more often than I’m comfortable with. It seems like every 12 issues or so lately, and while I hope they DO hope get more people interested in the title, as a long-time reader having an entire issue devoted to taking a moment and reintroducing characters while having a LOT of expository dialog can be a little wearisome.

Don’t let the above dissuade you if you’re a longtime fan, Kirkman introduces enough plots and develops characters enough to fully make this issue a worthwhile one (again, it’s one of his strongest traits as a writer), I just feel like a lot MORE could have been done if the narrative didn’t have to slow down as much as it does. This issue is still a great example of what makes Invincible one of the best books on the shelf and should absolutely be checked out by any fans, new or old. 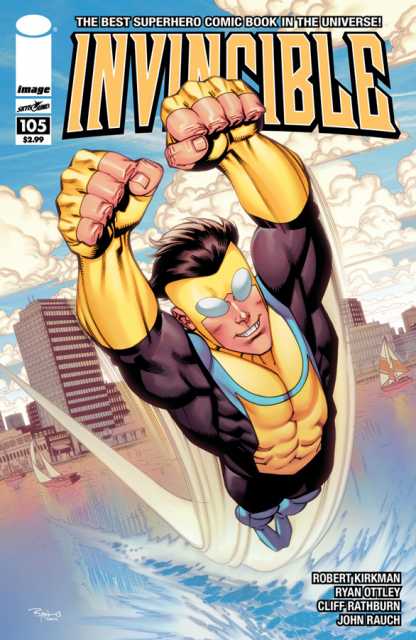