Superman's troops take control of Gotham and the Guardians begin to gather their forces.

INJUSTICE: YEAR TWO continues to prove its an entirely different experience than YEAR ONE. While YEAR ONE offered hit after hit -- delivering massive bits of action or shock in virtually every issue -- YEAR TWO is going for more of a slow burn. You can't just expect war between the Green Lantern Corps and Superman's regime to abruptly occur, after all. Writer Tom Taylor is skillfully building the tension as the two sides make their choices and you can feel the physical conflict getting closer and closer.

Yes, this issue continues to build upon what Superman and the Guardians are doing (and I'll get to that soon enough), but the true highlight here is Commissioner Gordon's role. With Superman marching his enhanced troops into Gotham, Gordon's back has been pressed against the wall and Taylor forces him into an immensely satisfying dialogue. Could such a talented detective honestly be oblivious to everything that's going on around him; whether it's the heroes of Gotham or even his own family? That's put in the spotlight in this issue and presented in a gripping discussion. Not only is it appropriately heated, but we're swiftly hit with a strong amount of emotion and the script allows the visuals to really sell the powerful moment.

Superman's role here is essentially putting his troops on the ground and this produces the more serious bits with Gordon, but the weight of those scenes are countered by the ones focusing on the Green Lantern side of things. Despite the bleak scenario and certainty of a disturbingly bloody and violent near future, the moments with these characters are hugely amusing and legitimately funny. From a Guardian being hilariously awkward and Guy Gardner pointing it out to John Stewart's remarks, these pages do a fine job balancing the tone. It's an issue that'll make you laugh one second and then completely shatter your heart just moments later. Hell, even the emotionally-driven scene has a quip that'll make you chuckle. This may be one of the most dire alternate universes around, but Taylor makes sure it's one that'll make you smile, too.

Taylor's script includes a very diverse set of locations, and artist Bruno Redondo and colorist Rex Lokus nail all of them -- which is particularly impressive given how tight the deadlines must be with this series. From a gorgeously vibrant opening page to a powerfully somber moment between two characters, the attention given to the environments and character work is consistent throughout.

Having the rain come down right when the foreboding moment hits feels a little cliche, but I can hardly complain because it sincerely looks solid and does indeed compliment the scene.

I'll be blunt: I love this issue. Not only does it do a tremendous job building the hype for what's to come, but it's incredibly well-written and consistently good looking. It'll make you laugh, it'll hit you right in the feels, and it'll absolutely make you excited for the series' future. There's been a whole lot of buildup in this volume so far, and, based on the writer's history, I'd like to believe that Taylor will make the upcoming showdown well worth the wait. We all know Superman's regime will still be in power 3 years from this point, but this series has proved time and time again that knowing the future hardly takes away from what occurs in the present. Needless to say, I'm stoked to see what what'll happen next in YEAR TWO. Seriously, you should be reading this series. 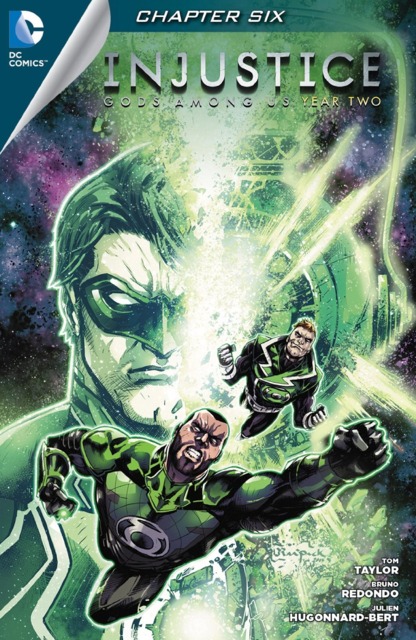