The Green Lantern Corps are coming to take down Superman and they've brought a big gun with them: Mogo.

The big war is finally here! Well, sort of. Writer Tom Taylor has brought Guy Gardner and his army to Earth and they're finally staring right into the Man of Steel's eyes. The battle technically does begin and it kicks off with one hell of a note, but once again, this issue's all about bringing the anticipation to a boiling point. The war is absolutely underway, but we're again left wondering "but what happens next!?" It's a tactic that's sure to bother some, but if you find yourself thoroughly invested in the characters and storylines in this alternate universe, it's sure to have you looking forward to the moment when you can buy the next chapter.

As always, Taylor's able to sprinkle in a bit of levity, even in the moments right before a war that will determine the fate of the planet. Harley Quinn's cameo made me smirk and there's another decent line or two thrown into the mix, as well. Then there's the cliffhanger. Honestly, it comes as a bit of a double-edged sword. Based on the video game, we have a good idea about what's to come, but, obviously, we've yet to see how it's handled and history has proven this book is more than capable of surprising us, even when we know the outcome. And the way the coloring changes to represent her rage in the final page? That's a great note to end on.

Artist Mike S. Miller and colorist Rex Lokus make the cosmic pages standout by far the most in this chapter. There's two praiseworthy double-page spreads of both sides preparing for conflict and you can't help but gaze at them and take a moment or two to stare at each individual. And, when it all hits the fan, they do a solid job hitting us with the motion and force behind Superman's actions as well as a certain blast that you certainly won't miss.

I get we're two years into Superman's change, but seeing him even a little torn over these decisions would be great. Even though we know where he ends up and what he'll eventually do, I can't help but feel like we should be holding onto a sliver of hope that maybe -- just maybe -- the version of Superman we love is still somewhere in there. It now feels like that part of him has been completely swatted aside and he's happily speeding towards "evil jerk" mode.

Like I've said before, I like a lot of Taylor's work and I have plenty of faith in his abilities, but there has been so much buildup at this point. It seems like we're constantly waiting for the next big thing to happen and we're instead hit with another way of building the hype. Here's hoping there's some major payoff around the corner!

Minor gripe: some of the facial expressions came off a tad stiff.

INJUSTICE: YEAR TWO #17 is yet another chapter that leaves me hooked and waiting until next Tuesday for more. The slowburn approach is beginning to take a toll and I wish we'd see a little more humanity in Kal-El, but I'd be a total liar if I said this issue hasn't left me curious and anxious to see where these plot threads will take us. The massive space battle has begun, Batman's forces are finally in motion, and we can expect to see more of the always fantastic Harley Quinn. So yeah, you can bet I'm sticking around to see what comes next! 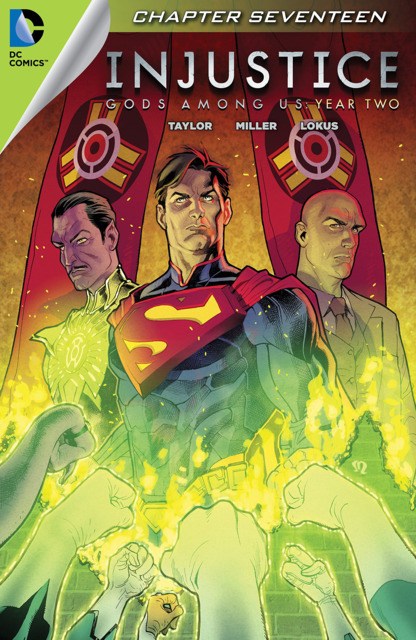