Superman and his allies confront Batman in an effort to rescue Hawkgirl.

Happy Injustice Day, everyone! Not only does every Tuesday (aka Injustice Day) deliver a new chapter of this awesomely engrossing digital series, but today there's also new content available for the video game. The fifth DLC character, Martian Manhunter, is now yours to use, so it's only fitting he also gets the spotlight in the comic, right?

The alien has been teased as Batman's ally for quite some time and now we finally hear why he's siding with Bruce and we even get to witness what he's willing to do to save this world from oppression. Due to page limitations, it's a fairly short scene but it still manages to be effective. The only issue is the emotional experience appears to have no visible impact on Clark, but maybe we'll see this brought up later on. Prior to that, writer Tom Taylor does a fine job entertaining, providing a few smile inducing bits of banter and a priceless reaction from Flash.

Mike S. Miller and the two colorists really impressed me with this issue. Yes, I have some minor gripes with some facial expressions here and there, but overall this was a really good looking issue. I particularly love the first time Batman approaches the team. It's a stellar look at how fantastic the design of his cowl is and I found myself gazing at all of the little alterations. And then there's the heat vision panel which is all kinds of vivid and impressive.

The solicit claims this encounter has deadly results, but seeing as Martian Manhunter floats in the background of the Watchtower in the game and he was recently added to the roster, it takes away from the weight of his demise. I have yet to play as him in the game, so I'm not sure if the playable version is from the original world. But if so, how'd he transfer over? Also, I'm mixed on how Taylor decided to open the story. It's certainly an attention getter and looks great, but right when J'onn makes his move, you immediately know how the rest of the issue is going to play out.

Corresponding with the video game, this latest issue puts a strong focus on Martian Manhunter and organically places him into this world's conflict. Throw in some a few terrific panels and chapter 29 is yet another solid addition to the series. It may not be the best issue yet, but it's still damn good and continues to prove why I adore this book. We still have one more issue in this specific storyline, so I'm super anxious for next Tuesday's issue. How will Batman react to these developments? Will Taylor deliver on a big moment for Green Arrow? GET HERE FASTER, TUESDAY. 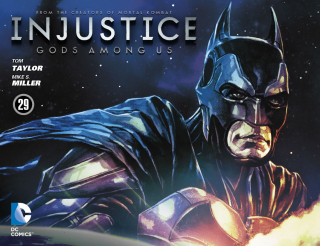