Kalibak leads an assault on Earth. Does Superman have what it takes to save everyone?

You know what I absolutely love about this issue? It's pretty much one giant reminder that, despite what you may think, Superman isn't some bloodlusted dictator.. at least not yet. Just because he lashed out after suffering one of the greatest tragedies imaginable doesn't mean he's been killing every single time things don't go his way. Last issue's cliffhanger certainly implied we were about to see "evil" Superman make his debut, but that's not the case. He's certainly letting loose -- as seen in his beyond epic strikes against Kalibak -- but murder isn't an option he's immediately considering. And the sweet irony of it all? The events of this issue could completely change all of that and bring us much closer to the horrendous man we saw in the video game.

We know Wonder Woman has essentially been the devil on his shoulder and whispering in his ear (it's an alternate universe, people), but this horrific event could finally push Clark over the edge (yet again). We know Clark eventually decides to lead the regime with a steel fist, and this chapter could very well be what gives him that epiphany. Hugely populated cities across the globe are under attack -- innocents are being slaughtered every second and if he doesn't hold back, he has the power to stop all of it from happening. Seeing as he already feels like he has the blood of one city on his hands, I think it's safe to say this massive invasion is what'll set him off once and for all. Just like Scarlet Witch once said, "No more mutants," I imagine Superman will say something like, "No more chaos," and then he'll solve it an in ironically chaotic and violent fashion.

You know what else rocked about this issue? The art. Tom Derenick and Alejandro Sanchez throw us face first into this terrifying scenario. My initial reaction to some of the madness was certainly mixed. On one hand, it's some truly glorious art for a digital comic and the mass destruction looks grand. It's not like The Avengers where you never see an innocent person harmed during an invasion. Instead, we witness the traumatizing sights of Parademons unleashing all kinds of hell down on innocent people as they're reduced to skeletons. The world is vibrant, detailed and truly hits home. When you see a woman holding a child and fleeing as everyone behind her is blasted apart, you can't help but get struck by the realization she's going to suffer the same fate a panel later -- we just won't see it. And with Superman hearing everyone's cries for help, that's some pretty powerful stuff? Derenick and Sanchez did a great job with these events and it really helps in selling Superman's moral dilemma.

I know this is going to sound all kinds of crazy coming from me, but part of me wishes we spent just a tad less time with the action and a little more time seeing how the heroes in the Watchtower and Bat cave are responding -- especially because of Batman's "secret" ally and Lex. It's understandable those in the cave are concerned about a wide-scale invasion with so few heavy hitters on their side, but it felt a little odd they didn't appear more willing to jump into action. Perhaps if there was more time spent with them we would have seen that response instead of only their initial reaction to the massive assault. That said, I understand writer Tom Taylor is working with limited space.

If you want to know what likely pushes Superman from "I want to help the world" to "I'M GOING TO HELP THE WORLD WHETHER YOU LIKE IT OR NOT" this is the chapter for you. This has to be the breaking point in the character because I honestly can't see writer Tom Taylor making Clark endure yet another tragedy worse than this. He's already lost his loved ones and now innocents are being decimated on a global scale. If this doesn't force him to step up his course of action and take leaps and bounds towards the evil Superman we know in the game, I simply don't know what will.

With impressively detailed and colorful visuals, highly amusing action between Superman and Kalibak, and a gripping turn of events, INJUSTICE: GODS AMONG US proves once again it's not only a must read, but also one of DC's most engrossing books.

Now I'm left wondering what'll happen with Diana and the plane... it definitely seemed like she saved the day at first, but then we had the panel of the Parademons attacking her. I guess we'll see next Tuesday! 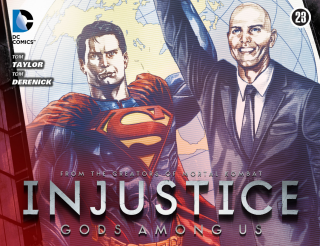